Remain loyal to Alexander and do whatever he says and kill anyone who dares enter their castle.

The Gatherers are a group of minor antagonists in Amnesia: The Dark Descent. They are Alexander of Brennenburg's army of nightmarish servants, who do nothing but wander the dark corridors of his castle and hunt down any unfortunate individual they happen to stumble upon.

The disgustingly deformed monsters were apparently deceased soldiers who were brought back to life via the Orb's magical necromancy powers, cursed to forever serve the Orb's current/former wielder, Alexander.. Though they are physically unattractive, they make up for their inhuman strength and speed. They are able to destroy wooden doors with an arm swipe or two and can almost outrun a fit average man such as Daniel.

When the young Englishman Daniel stumbled upon Brennenburg castle, he teamed up with Alexander, the baron and the Gatherers', to stop the Shadow from slaughtering innocents who get their hands on the Orb. After Daniel realizes Alexander he is a power hungry sociopath who wants to selfishly keep the Orb's power for himself, he goes on a mission to hunt the baron down. Alexander, realizing that his former ally attempting to kill him, locks himself in an isolated area of the castle and orders a few Gatherers', the Servant Grunts and Servant Brutes, to hunt Daniel and murder him. 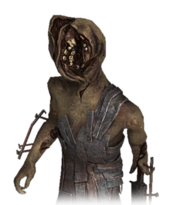 The Servant Brutes are one type of The Gatherers seen in the game Amnesia: The Dark Descent, as well as one of the more dangerous types of Gatherers, being able to kill Daniel in one hit. Brutes, like Servant Grunts, cannot talk, and emit strange, whale-like noises and moans. Staring at them will reduce sanity.

The Brutes have a distinctive brown-green color, unlike the pale white of their Grunt counterparts. They have heads that are split open in an almost floral shape, with teeth lining the inside of the opening along with a single eye. The brutes wear leg-less, metal tunics and have metal plates and nails that connect their arms and legs at their joints. These plates make creaking noises when the Brute walks. In place of a left forearm they have a metal shaft with an attached blade. This is their primary form of attack and can bash through doors with it in only two hits and kill Daniel in only one. When Daniel is hit by one, there will be a long slash mark on the screen, as opposed to the relatively small claw marks caused by Grunts.

The Servant Grunts are another type of monstrous Gatherers in Amnesia: The Dark Descent and are the weaker, more common type of the Gatherers. While not as powerful as Servant Brutes, they are still a considerable threat in any appearance.

Grunts are repulsive, humanoid beings with seemingly pieced together bodies. Stitches and open scar-like wounds cover their pasty and stained skin, with bandages wound tightly around their feet and other parts of their torso. Their "skin" also functions as their clothing, as shown by the skirt-like protrusion around their waist and the sound of rubbing skin made when they walk. Their heads are malformed, with a distended jaw that hangs over their torso, stretched to an absurd length. There are clumps of hair still attached to their head. Their eyes are large, bulging and reptilian. The Grunts are missing their fingers on the left hand (though the concept art displays another set of digits); they are instead replaced by crude blades, which serve as the creature's primary weapon, and are stained with blood; this indicates that the grunt has either attacked another person or animal before, or that the blades were attached in such a way that it caused the grunt to bleed.

The Grunts cannot speak properly, owing to their inability to move what is left of their lower jaw and their apparent lack of a tongue. However, they are still capable of emitting a range of guttural growls, hisses and noises. Upon paying close attention, their growls sound like an attempt at normal speech, for if it notices the player, it may make a garbled attempt to say "I see you." Their visual and auditory perception appears to be unimpaired though, as they can easily notice Daniel if he is within viewing or hearing range. Staring at them will reduce sanity.

Sometimes while idle, Grunts can be seen and heard scratching themselves or whimpering, as if crying. Their initial growl is the signal that they hear Daniel and are coming to investigate. Daniel can withstand a couple of blows from a Grunt, and while they are difficult to outrun when they see Daniel fully, they do get confused fairly easily and thrown off the chase. Laudanum should be taken if a Grunt hits Daniel.

The intelligence of the Grunts is rather questionable, as they are rather inefficient at searching areas. They will also not notice Daniel if he is standing still and his head is not in view, unless there is a nearby light source such as a candle. They can even be thrown off if Daniel hides behind a door or other object, even if it is obvious (to a functioning human) that Daniel is there. It does seem that Grunts have some intelligence, though, and perhaps emotions; if Daniel makes a loud noise, the Grunt may turn to look in fright with its hands to its mouth before searching. 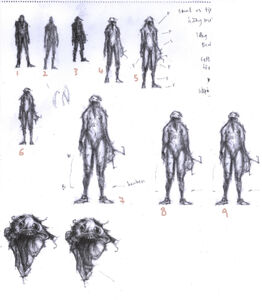 Early designs for the Grunts. 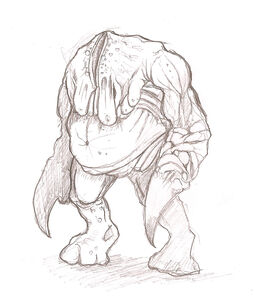 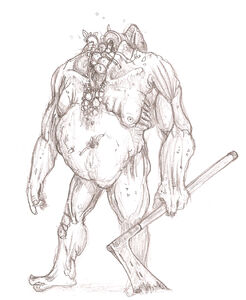 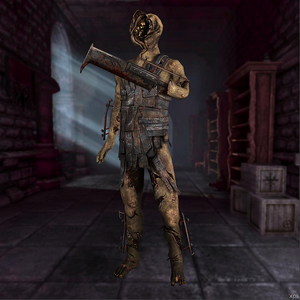 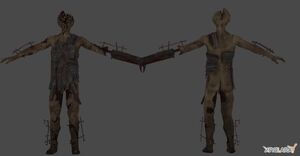 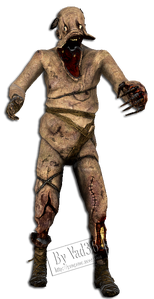 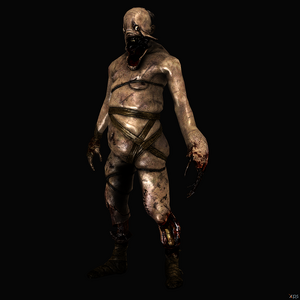 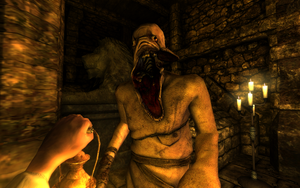 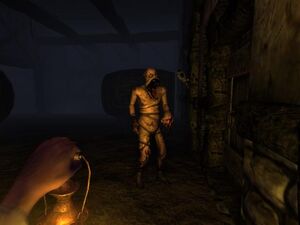 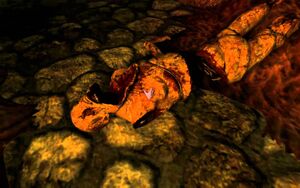 A dead Grunt.
Add a photo to this gallery

Retrieved from "https://villains.fandom.com/wiki/The_Gatherers?oldid=4025374"
Community content is available under CC-BY-SA unless otherwise noted.