The Ghost and the Darkness

The Ghost and the Darkness

Hunting and killing humans for sport when not hungry.

Prevent the construction of the railway (both failed).

The Ghost and the Darkness are the titular main antagonists of the 1996 historical adventure film of the same name. The two lions are responsible for the numerous deaths in Tsavo, Kenya during the construction of the Uganda Railway. They are based on the Tsavo Man-Eaters.

They were portrayed by Ceasar and Bongo and their vocal sound effects were provided by Martin Lopez.

They are a pair of man-eating lions from the Tsavo region, which were responsible for the deaths of a number of construction workers on the Kenya-Uganda railway from March through December, 1898. The significance of this pair of lions was their unusual behavior, such as the number of men killed and the manner of the attacks.

They were dubbed "The Ghost and the Darkness" by the people of Tsavo, Kenya, because of their hunting methods. Unlike other lions, they were shown to kill their prey and lick up their victim's skin, and drank their blood when it reached the surface. Unlike other male lions, they would also hunt together. They were also believed to have been demons in lion skin. They also killed for pure fun rather than for sustenance purposes. They have killed about eighty people or more. Because of them, the building of the bridge was halted, and John Henry Patterson was appointed to kill the lions, after he had killed one before. Also joining him was a native African named Samuel, and a hunter named Charles Remington, who was appointed by Beaumont when the construction of the bridge was slowing.

After a few failed attempts, Remington sets up a trap by using Patterson, and a baboon as bait. This kills one of them. The following day, the remaining lion is revealed to have dragged Remington out of the camp overnight and killed him. Seeking vengeance, Patterson burns the grass surrounding the grass to lure the lion out. This results in them ending up on the unfinished bridge, where Patterson successfully kills the surviving lion. The bridge construction is then completed. Samuel, who had been narrating the movie, says that the carnivorous man-eaters can be found at the Field Museum in Chicago, Illinois. 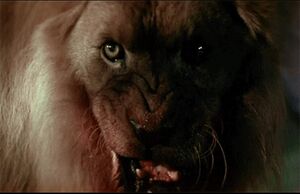 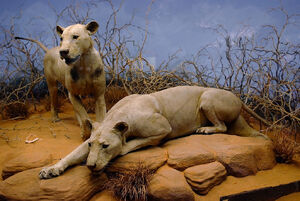