Steal Princess Micomicona's kingdom (both only in Don Quixote's imagination)

The Giants are imaginary creatures and minor antagonists that first appear in Chapter VIII (titled "Of the good fortune which the valiant Don Quixote had in the terrible and undreamt-of adventure of the windmills, with other occurrences worthy to be fitly recorded") of the 1605 classic novel El ingenioso hidalgo Don Quijote de la Mancha (The Ingenious Gentleman Don Quixote of La Mancha) by Miguel de Cervantes.

As Don Quixote is one of the pieces of literature with most adaptations, the Giants have been featured in many plays, movies and TV shows, though the actors that portray them tend to go uncredited. In others, the Giants remain as windmills.

In many myths of Spanish folklore, the Giants are, for the most part, simply large humans with slightly exaggerated characteristics, as is the case throughout much of Europe.

Though the Giants in the novel don't get any descriptions beyond being Giants and some of them having arms nearly as long as two leagues (11 km or 6.9 miles), many have interpreted them as being windmill-like, with either four arms or two of the blades representing sword sheaths or part of their clothing. Some adaptations make them more monstrous, turning them into cyclopes (which were sometimes part of the Giant family in Spanish folklore) or making them bicephalous (a.k.a. giving them two heads).

The titular Don Quixote deludedly confused thirty to forty windmills with Giants and attacked them in spite of his "squire" Sancho Panza telling him what they really were, only to be swatted away, along with his horse, by one of the windmill's blades after a sudden strong gust of wind caused it to move with great force.

After Sancho came to help him, Don Quixote still denied the truth, telling Sancho that the wizard Frestón (Friston in English adaptations) had turned the Giants into windmills before he could strike them in order to steal the glory of victory from him.

Outside of these Giants, many others are mentioned and imagined by Don Quixote, such as one who stole princess Micomicona's kingdom. While sleepwalking, Quixote defeats this Giant, though in actuality he just damaged a few wineskins. 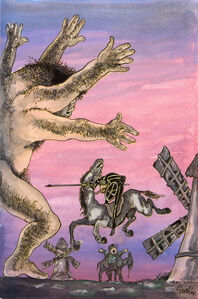 An illustration of the Giants by comic book artist Serafín. 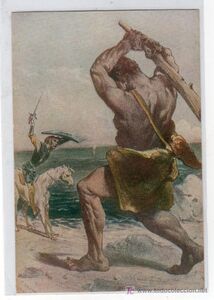 A Giant in a postcard from Spain.

The Giants in the 1979 Don Quixote cartoon. 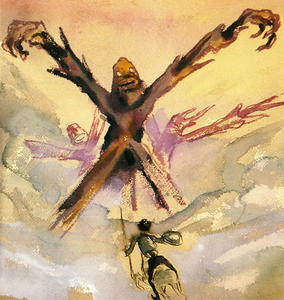 Concept art for the unmade Disney adaptation, by Jess March. 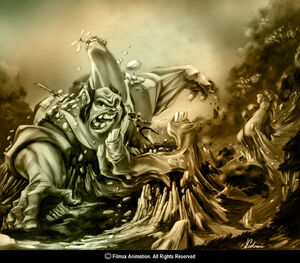 Concept art of the Giants for the movie Donkey Xote. 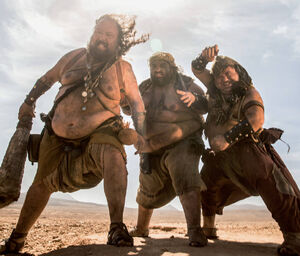 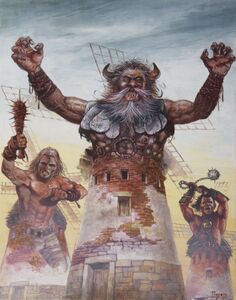 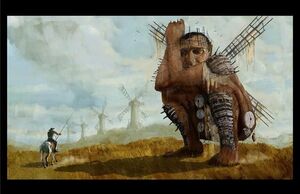 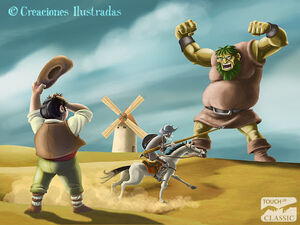 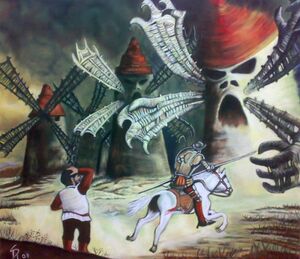 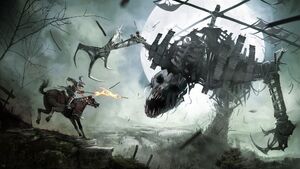 Retrieved from "https://villains.fandom.com/wiki/The_Giants_(Don_Quixote)?oldid=4226329"
Community content is available under CC-BY-SA unless otherwise noted.