The Special Surprise Inside

Unknown as they move from planets to planets

To drain each planet dry to produce their merchandise.

Faux Affable aliens
The Gigglepies were minor villains in The Fairly OddParents.

They are an extraterrestrial race that resemble rabbits. They debut in the episode So Totally Spaced Out where they are seen as a prize in a box of Invader O's. They greatly terrify the Yugopotamians, who are genuinely afraid of cute things, and Mark goes to Timmy for help. They also have the ability to hypnotize people into doing what they want. As the Overlord Gigglepie explained they would go from one planet to another in order to enslave the inhabitants of that planet and force them to make their merchandise. When they have no further use for that planet, they blow it up, and move to the next one. He then tells his subjects to seize Timmy. The conflict is resolved when Cosmo eats a Gigglepie only to spit it out later and state that they taste like manure. Since manure was considered a delicacy to the Yugopotamians, Timmy wishes for all of the Yugopotamians to have knives, forks, and empty stomaches. After this episode, a few made cameo appearances in the show. 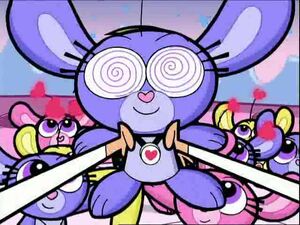