Controlling other beings in hopes of bringing parts of the sword to him.


Defeat the Raven Lords.
Defeat Nerthus/The New Rook (all failed).
Have the Thulian Sword brought back to him (succeeded).
Eradicate all of humanity.
Retrieve the re-forged Thulian Sword and use it to become the most powerful being in history (all failed).

The God-King is the unseen overarching antagonist of the Nazi Zombies mode of the 2017 video game Call of Duty: WWII. He takes Peter Straub's place as the main antagonist of the mode after his death at the Battle of Berlin. He is also the final boss of "The Frozen Dawn" DLC map and the Zombies mode.

The God-King was a giant Albino-like Zombie and the ruler of the ancient Thulian Empire's civilization. A millenia ago, before prehistoric times, he was presumed killed by the Raven Lords: An'heist, Talrek, Lu'roth and Sang'ket (chosen by the original rook), or more simply, the lords of the Blood, Storm, Death and Moon Raven.

During a retreat caused by a failed campaign during the Second Crusade, the Holy Roman Emperor of Germany, Frederick Barbarossa's sea vessel had been ran aground on the shores of Antarctica, which was where he found (an already ancient) Thulian sword. Barborossa had then used the sword to become the newly self-appointed Holy Emperor of Germany, And secretly under the control and influence of the God-King, he had planned to conquer the entire world. However, when Barborossa was slain by his top-ranking royal guards, (who where the newly chosen Raven lords), who were chosen by an entity called Nerthus, or more simply "The New Rook", he had the sword dis-assembled and had its parts scattered and hidden in different parts of the world.

During the events taking place during World War II, the Hilt of the Thulian sword was found in an underground salt mine located in Mittleburg, Bavaria in Nazi Germany. When a Nazi Project division called Ahenerbe, led by Heinrich Himmler who was a Reichsführer in the SS, Peter Straub, a Scientist and one of Hitler's closest confidants. And Heinz Richter, a weapons expert in the Wehrmacht, were contacted and placed the small German town in lockdown to avoid interference from the local civilians, under the influence of the God-King. They started by extracting energy from the hilt, the energy would then be given the name of Geiskraft, by Straub. The energy would then be used to create a Zombie army for the Führer's of the German Armies across all fronts of the War.

After the destruction of the Panzermörder, the death of Heinz Richter, and the theft of the of the swords hilt from the Nazi's possession, the Raven team responsible where then sent to the Heligoland, an island housing the Nazi's Navy's resources, located in the Northern Seas of Nazi Germany. There the Raven team aim to gain intel into Straub's operations before the British forces come and commence bombings of the island. during the operation, they managed to find the pommel of the Thulian Sword, hidden within a statue of Nerthus, that was placed by the previous Raven lords. Once they escape the Nazi Sea-Fortress and the British offices commence the bombings, the Raven team manage to escape on one of Straub's escaping Zepplin fleets, heading for Berlin, Germany.

When they arrived, Berlin was being attacked the Soviet Armed Forces, and Straub was ordered to release hordes of undead soldiers in hopes in repelling the Russian invasion of the Occupied city. Meanwhile, the Raven team manage to obtain the Blade of the Thulian sword. Shortly after witnessing Straub being cornered, mutilated and brutally killed by hordes of Zombies in his Zepplin's lab. Following the death of Straub. The Raven team, alongside the newly formed B.A.T (Bureau of Archaic Technologies), managed to track properties of the sword and found out that it originated somewhere in Antarctica. While the Raven team headed for Antarctica, the new members of the B.A.T fought through the German defenses via Caravan to transport the sword from Luxembourg to Spain, due to the Germans occupation of the skies through the use of heavily armed Zepplin fleets. Once the sword was transported to its destination, the Raven team, and B.A.T member Mikhal Saburov, who was also the leader of the Soviet Armed forces during the Siege of Berlin, had accompanied the sword to be re-forged in New Swabia, a reigon of Antartica controlled by the Nazis.

Unfortunately though, the plane escorting the sword was shot down by a giant bolt of Geiskraft. Luckily for the Raven team, Saburov had survived the crash, and the Raven team then entered the long lost city of Thule. While Saburov stayed with the sword awaiting help from B.A.T reinforcements. The rescue team was led by B.A.T agent and Hank Rideau's right-hand, Vivian Harris. Unbeknownst to the others, she was secretly under the influence of the God-King, and took the opportunity to have the sword returned to him after almost a millennia. While the Raven team where making there way through the lost city. Vivan fought against the God-Kings influence and stabbed him with the sword, re-awakening him in the process. When he re-awoke, he ultimately killed her by slamming her to the ground. While the Raven team fought him, Marie Fischers brother, 'Klaus' (who was now the new rook) had chose the raven team to be the new Raven Lords. With the newly obtained-powers, they were able to overpower and eventually defeat the God-King. 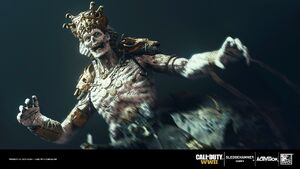 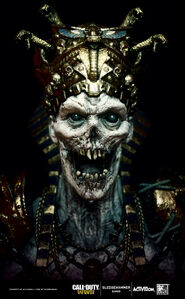 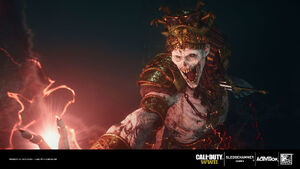