Raping Michonne.
Torturing both his subordinates and enemies.

Kill any intruders on his territory.
Take over the prison.
Keep Michonne as his personal plaything.
Expand Woodbury and his own rule (all failed).

Brian Blake better known as The Governor is one of the main antagonists in the comic book series The Walking Dead, serving as the primary antagonist from Volume 5: The Best Defense to Volume 8: Made To Suffer. He is the ruthless governor of Woodbury who took extreme measures to assume command over the residents of the town. His goal was to take over the Meriwether County Correctional Facility and kill all of its inhabitants. Brian's atrocities and brutal terror towards Rick's group affected their mindset drastically to date, making the main survivors even more colder and hardened than they ever were.

Prior to his arrival at Woodbury, Brian Blake was nothing like the villain he would become. He was a meek, insecure, and generally good-natured man. Weak and cowardly, he relied of the protection of his cold younger brother, Phillip. His insecurity took it's toll on him as days grew darker and humanity crumbled, and he ultimately succumbed to carnal instincts. To assure he would never be weak, he assumed his brother's identity as Phillip Blake.

Before he first met Rick Grimes and his group in the series, Brian Blake ended up becoming a ruthless and tyrannical ruler of a residential town called "Woodbury" - up to the point where he ended up branding himself "The Governor" to assert his leadership over the townsfolk and the militant forces within the area. At times he would often grrf outsiders to the zombies and arrange fights between his people with the zombies surrounding them. He also keeps Penny as a zombie pet, as well as keeping the heads of his decapitated victims in fish tanks.

Soon enough, his sadistic and brutal nature emerged when Rick Grimes and his two companions Michonne and Glenn Rhee arrived in town. At first the Governor appeared friendly towards them, but eventually revealed his true colors when he demanded to know the location of their campsite - a prison. When they refuse to tell him about the prison's location, the Governor proceeded to cut off Rick's hand and later raped Michonne repeatedly in front of Glenn - which consequently left Glenn mentally traumatized in the process. Martinez soon helped Rick and his companions escape, but Michonne decided to confront the Governor for revenge. She overpowers the Governor and, after restraining him into her captivity, proceeded to brutally torture him by dismembering and disfiguring him to the point of near death. She then left the Governor to die, but he was found by his two enforcers Bruce and Gabe; they later brought up to Bob Stookey, the town drunk who was a former army medic, and they manage to help The Governor recuperate from his his death experience.

Soon afterwards, the Governor resolved to exterminate Rick's group. He learns that Martinez has been killed, and uses the latter's zombified head to create a propaganda by convincing Woodbury that Martinez was murdered by Rick's group in cold blood. This inspired his army to join him in attacking Rick's group, and the Governor leads them on a lethal assault on the prison after locating the campsite. However, the battle is won by Rick's group in the end and The Governor and his army are forced to retreat. Later on Michonne and her companion Tyreese follow them in an attempt to kill the Governor, only for Tyreese to get captured and for Michonne's katana to be confiscated by the Governor himself.

The Governor and his army later return to the prison with Tyreese as their hostage. In that moment, the Governor brandishes Michonne's katana onto Tyreese's neck and issues a ultimatum to Rick's group - either they surrender the prison to him or he will execute Tyreese. In response, Tyreese urges Rick's group not to let him in; Rick's group comply with Tyreese's request, knowing that The Governor intents to murder everyone present at the prison anyway. Upon realizing that Rick and his group are not letting him in the prison, the Governor kills Tyreese by decapitating him with Michonne's katana before kicking the deceased's body into the grass field.

When he reunites with the rest of his army, the Governor claims that Rick's group murdered Tyreese and - despite some of his army wanting to return to Woodbury - insists that they will go back to attack them in the prison. With that, he leads the army back to the prison and they launch another attack on Rick's group. Just as it appears that the Governor is about to lose again upon seeing many of his forces being gunned down, he brandishes a tank and uses it to ram through the prison fences in an act of desperation. This consequently allows the zombies to enter the prison, and several people - including members of Rick's group - end up getting killed in the ensuing carnage. Regardless of the situation, the Governor forces his army to continue with the onslaught - going as far as to berate one of his young soldiers for feeling guilty after killing Ben Greene during the battle.

Eventually, Rick and his family attempt to flee as their friend Alice covers fire for them. The Governor notices this and kills Alice before ordering Woodbury resident Lilly Caul to kill them. She reluctantly complies and opens fire on the Grimes family, killing Lori and causing the latter to fall on top of baby Judith; consequently, Judith is crushed to death as a result of Lilly killing Lori under the Governor's orders. Just as Rick and Carl escape the carnage, the Governor notices Ben's mournful father Hershel in an emotional state. When the Governor confronts him, Hershel says "Just kill me" and the Governor responds by executing him.

In that moment, Lilly examines through Lori's dead body and discovers Judith under her. Horrified and enraged, Lilly angrily brands the Governor a monster and hysterically berates him for making her kill a baby; she becomes furious enough to draw her gun at the Governor, but the distraction of oncoming zombies allows the Governor to fight back and punch her onto the ground. While fending off a horde of zombies, the Governor desperately tires to retain his control over his army by assuring them that - in spite of the escalating situation - they can still win the war. However, Lilly - finally realizing how evil the Governor truly is - openly pulls out her handgun and shoots him in the face.

She then kicks his body into the hordes of the zombies and leaves him to die by ordering the remaining Woodbury soldiers to make their narrow escape; they do so as the Governor gets eaten alive by the sheer number of zombies. With the Governor dead and his reign of terror ultimately brought to an end, the deaths of those that he himself had committed - including Tyreese, Axel, Patricia, Billy, Alice, Lori, Judith, and Hershel - have all been avenged.

The Governor also appears as a major antagonist in the live-action television series by AMC, although he is actually Phillip Blake as opposed to Brian Blake and has an altered backstory and personality. As a result, he is portrayed with much more sympathy as opposed to his comic/novel counterpart.

He was portrayed by David Morrissey. 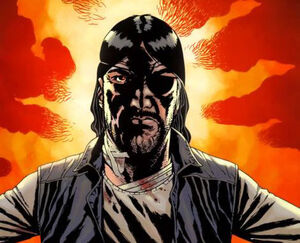 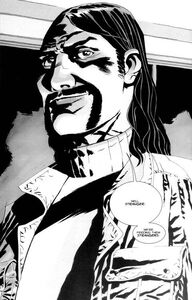 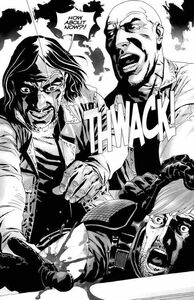 The Governor cutting off Rick's hand. 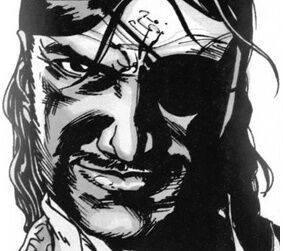 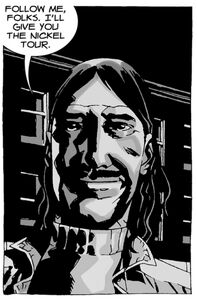 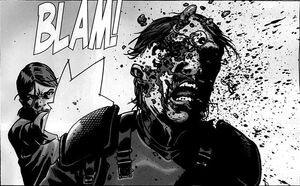