Caring for his daughter.
Maintaining his dual personality.

Phillip Blake, better known as The Governor and later aliased Brian Heriot, is one of the main antagonists in AMC's The Walking Dead. He is based on his comic and novel counterpart, although the TV version of the character is more sympathetic. He served as the main antagonist of both Season 3 and the first half of Season 4 and the posthumous overarching antagonist of Season 5.

He was portrayed by David Morrissey.

In Season 3, he is introduced as the governor of the Woodbury committee, whose wife was killed in a car accident and whose daughter, Penny, was bitten by a walker and turned into one herself. He cannot bear to let her die, however, so he keeps her chained up with a mouth guard to prevent her from hurting anyone.

In his debut episode, "Walk With Me," he introduced Andrea and Michonne to Woodbury. While taking care of Lt. Welles, the Governor discovers that Welles' men have a camp not far from Woodbury. When he and his men find them, the Governor tells them that they have Welles before they gun them all down and take their supplies. After that, the Governor returns to Woodbury and tells the people that the men were killed by walkers when they got there. That night, the Governor goes to his room of aquarium tanks, and among them is the decapitated head of Lt. Welles.

In the episode, "Made To Suffer," while Rick and his group rescue Glenn and Maggie, Michonne heads to the Governor's apartment, where she finds the aquarium tanks and a zombified Penny. She also sees that the Governor and Andrea have become lovers. Before she can kill Penny, the Governor appears and begs her to spare the girl. Michonne kills her anyway, however, and the Governor screams in agony. This leads to a brutal fight between the Governor and Michonne, ending with her stabbing him in the right eye with a glass shard, blinding him. He now wears an eye-patch to cover the wound. Penny's death destroys whatever humanity was left in the Governor, and he is consumed by an obsession with destroying Michonne, Rick and the prison group. His actions lead to an assault on the prison and the deaths of Axel and Merle Dixon.

In “Welcome to the Tombs,” the Governor has Milton Mamet tied up to a pipe in the shacks and beats him up; he blames Mamet for the death of his men, since he burned up the walkers they had captured. When Milton asks about Andrea, he takes Milton to Andrea's torture room, and orders him to kill her in order to get out of this situation alive. Milton tries to attack the Governor instead, but he defends himself and stabs Milton in the gut multiple times. He decides to leave Milton locked up with Andrea, since he will reanimate and kill her.

Later, he and the Woodbury Army head to Rick's group at the prison so they can kill them once and for all. They arrive there exploding the guard towers, shooting all the barricades and running down the courtyard gate, but the prison seems to be empty. Later, they are attacked by flash grenades and walkers, everyone starts panicking and the Governor tries to calm them down. As they are running outside, Glenn and Maggie start shooting at them from the catwalk, telling them to leave the prison. The Governor wants to stay and fight, but his army abandons him, prompting him and his men to get in a car and go after them. As they reach the army, they stop the convoy and the Governor orders them to go back to the prison immediately. Martinez and Allen agree with him, but the rest of the army refuse to attack the prison again, since they are scared and want to return to the safety of Woodbury. Enraged, the Governor opens fire on his own people. Allen tries to stop him, but The Governor tricks Allen into standing down, and then kills him. Martinez and Shumpert watch, horrified, as The Governor massacres the entire population of Woodbury. He gets back in his car with Martinez and Shumpert and they drive off away.

The Governor did not appear in the first few episodes of the season, but he was mentioned by Michonne, Daryl, and Tyreese. During the first half of season 4, he appears in the very end of "Internment", secretly watching over the prison from a distance.

In "Live Bait", the Governor camps at the site where he massacred the National Guard soldiers with his remaining two men, Martinez and Shumpert. However, they grow wary of him and abandon him during the night. He then returns to Woodbury, destroys the barricades and burns it to the ground in a fit of insanity, destroying it permanently and allowing walkers to overrun it. After surviving for seven months on his own, he comes across a building with several messages and names written on them, one of which is Brian Heriot. After arriving in a town, The Governor sees a young girl peering at him from a window and enters the house, finding a family who at first warily hold him at gunpoint, but then welcome him into their home.

During his time there, he befriends them and helps them recover oxygen tanks for their father, David, a terminally ill cancer patient. He begins to develop close bonds with the family, especially the girl, Meghan. He then kills a zombified David, who expires after using up the oxygen.

Eventually, Philip makes the decision to leave, but the family comes with him. The group rests on the side of the road, in a semi-truck, where the Governor and Lilly share a passionate kiss. On the road, they are pursued by walkers, and Lilly and Tara are separated from The Governor and Meghan. The Governor carries Meghan to flee but falls into a pit, similar to the "Screamer pits" of Woodbury. The Governor manages to kill all of the walkers in the pit, and is discovered by Martinez.

In "Dead Weight", after Martinez takes him and Megan out of the pit, he allows the Governor and Tara and Lilly Chambler to join his group as long as they do not question his leadership. After settling in with the group, the Governor plays some golf with a drunk Martinez. Martinez offers Phillip to run the camp as a partnership which enrages him. The Governor then hits Martinez with a golf club and drags him to a walker pit, slowly dropping him into the walkers resulting with Martinez's being eaten alive. The Governor later stabs and kills Pete by strangling him to death, before dragging his body out to the lake and weighing it down. The Governor then threatens Mitch into letting him become the leader and to say that Pete died on a supply run. The Governor is last seen near the prison, he spies on Rick and Carl, and then he spots Hershel and Michonne and trains his gun on Michonne from a distance.

In "Too Far Gone", The Governor kidnaps Michonne and Hershel and later gathers up the people at the camp and convinces them to help take the prison for their own. The Governor leaves Lilly and Meghan at the camp to keep them safe. In the hostages RV, The Governor tells Hershel that they can't live together as he wouldn't get along with Rick and Michonne. The Governor's group part to the Prison and they start by blowing up a tower with the tank- He calls Rick to talk and tells him that their people must leave the prison or they would die. Despite Rick trying to convince that they could live together, The Governor says they can't. Refusing to leave, Rick instead brings out a memorable speech that Hershel once told him that everyone is not too far gone, and that everyone can live in peace together. The Governor appears to have listened to Rick's speech, but - after looking towards him on the other side - he calls Rick a liar and strikes Hershel with the sword, partly decapitating him and leaving both Rick's group as well as his own equally shocked; Hershel's daughters Maggie and Beth reacting horrifying. Angry, Rick shoots The Governor in the arm, prompting both sides to commence open firing against each other; during which Rick gets shot also. Upon retreating, The Governor notices Hershel attempting to crawl away and catches him before slashing his head off, killing Hershel. Seconds later, Lilly arrives with a dead Meghan, who was bitten by a walker. The Governor remains silent and shoots the little girl to prevent reanimation. He then orders his army to bring the fence down and kill the prison group. As the Governor advances behind the tank, he takes cover behind a bus and is tackled by Rick. The two engage in a fist fight and The Governor gains the upper hand. As he is about to kill Rick by choking him, Michonne sneaks behind him and stabs him in the chest, wounding him and saving Rick. Before leaving with Rick, Michonne approaches towards the wounded Governor; but rather than killing him, she instead leaves him to die from his wounds. Soon afterwards, as the dying Governor is surrounded by countless walker, Lilly approaches him and silently shoots him in the head - killing him and avenging all the deaths he had committed: including Axel, Merle, Milton, Andrea, and Hershel. 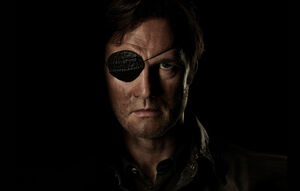 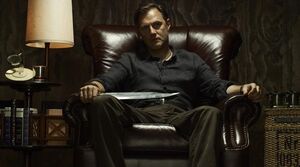 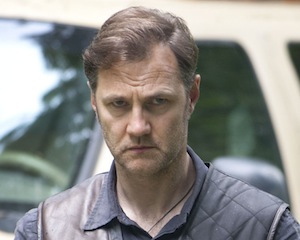 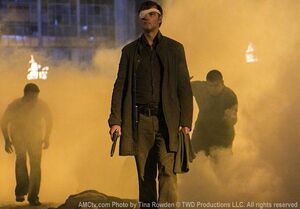 The Governor during the attack on Woodbury. 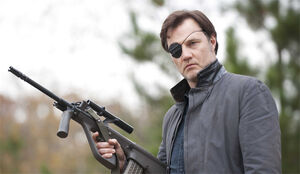 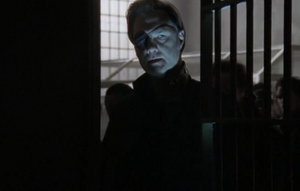 The Governor inside the prison. 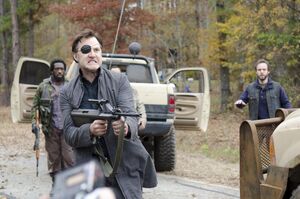 The Governor massacring all of his fellow Woodbury residents. 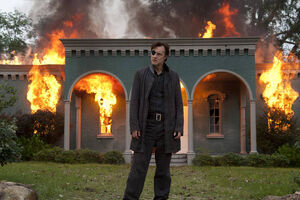 The Governor burning down Woodbury. 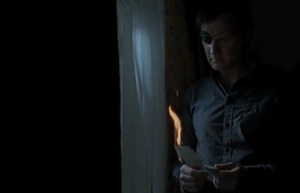 The Governor burns the photo of his family. 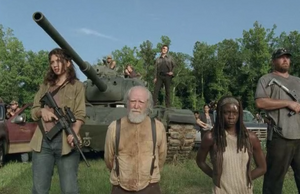 The Governor with his hostages. 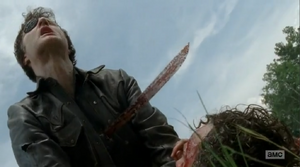 The Governor stabbed by Michonne. 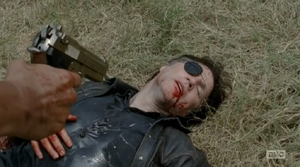