The Grabber (The Black Phone)

Ability to hear The Phone

Torture and murder as many teenage boys as he can

Albert Shaw, better known as The Grabber, is the main antagonist of the 2022 supernatural horror film The Black Phone, which is based on the 2004 short story of the same name by Joe Hill from his 20th Century Ghosts collection.

He is a serial child abductor and killer who preyed on the boys of a Denver suburb. By the time of the film's events, the Grabber kidnaps Finney Blake, intending to keep him trapped in his basement for the rest of his life, before changing his mind later in the film and wanting to torture and kill him instead.

He was portrayed by Ethan Hawke, who also played Martin Asher in Taking Lives, The Fizzle Bomber in Predestination and Arthur Harrow in Moon Knight.

Not much is known about the serial child murderer known as the Grabber. What is known is he lives with his drug addict brother in a Denver suburb and has a day job. For reasons unknown, the Grabber abducts young boys and imprisons them in his basement unbeknownst to his brother. He would eventually kill the boys and bury the bodies in a house across the street. He had killed a total of five children with Finney Blake's friends Bruce and Robin being his latest victims. He seems to have same abilities than Finney by being able to hear the black phone too, even if he deny it.

In 1978, the Grabber kidnaps Finney when he lured him into helping him after dropping his groceries. Trapping him in the basement, the Grabber, now wearing a mask, informs Finney that he won't hurt him, that nothing bad will happen to him anymore and that the black phone on the wall doesn't work when the boy tried to use it (this is later debunked by the ghost boys who confirm that he actually can hear them). While trapped, Finney receives a call from Bruce who had no recollection of his life prior to his kidnapping and untimely end. He tells Finney that there was a floor tile that he tried to dig out before being stopped by the Grabber. Finney does as he is told and covers the hole with a rug.

Sometime later, the Grabber offers Finney food and tell him that he think to let him go but asks him what his name was. Finney instead lies leading to the Grabber becoming enraged and angrily smashing the plate containing eggs and a soda bottle on the ground and revealing a newspaper detailing his disappearance.

After that fails, Finney is stopped from going upstairs by another ghost child named Billy. Explaining that the Grabber deliberately leaves the door unlocked so he could beat the child to death in a game of "Naughty Boy," Billy has Finney find a chord that he tried to use to escape through the window. However, that too fails.

Finney's sister Gwen has several visions in her dreams describing the Grabber's abductions until she learns the address to what she assumed was the Grabber's lair. She then dials the police to investigate. Meanwhile, Finney receives another phone call, this time from Griffin, who explains that the Grabber took a lock from his bike and used it to lock the front door, but Griffin has written the code on one of the basement wall. He also senses that the Grabber was asleep. Finney takes advantage of this and sneaks upstairs. After unsuccessfully trying to undo the lock, Finney finally finds the combination and flees. Unfortunately, the Grabber's dog alerts its master and the Grabber sprints after the young boy. He grabs him and threatens to gut him and use his intestines to strangle the life out of him should he scream, before knock him out.

Back in the basement, Finney gets a call from a punk named Vance. Learning of a hole in the wall, Finney grabs the toilet lid and breaks his way through the wall only to realize he was trapped behind a refrigerator. Distraught, Finney has a breakdown as the phone rings again. Picking it up, he learns his friend Robin was on the other side. He comforts him and urges him to fight back so his death would not be in vain. Finney takes the phone and fills it with the dirt he had dug out earlier.

Max, the Grabber's brother, discovers Finney and tried to help him only to be murdered by his own brother who then shifts the blame on Finney. He comes at Finney with the ax, but Finney fights back. The Grabber stumbles into the hole that was previously covered, and he breaks his ankle and is unable to get out. A enraged Finney proceeds to hit The Grabber continously in the neck and face with the phone, before wrapping the cord around his neck and strangling him in a rage. The five Ghosts mock their tormentor through the phone, tormenting him and calling him pathetic.

Realising his peril, The Grabber attempts to escape Finney's grasp, but the ghosts of Bruce Yamada and Robin gives Finney the confidence to stop The Grabber once and for all, and Finney does so by breaking his neck with the phone cord. The Grabber let's out a gargled scream and dies almost instantly, and his body sinks in the hole. Finney uses a piece of meat to distract a guard dog, and is saved by the authorities.

A while after The Grabber's death, Finney returns to his school, only to find he had become a local legend, with everybody respecting him and knowing him as "The Badass who killed The Grabber".

A cofident Finney then sits next to his crush in class, and the film ends. 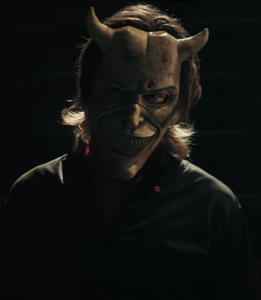 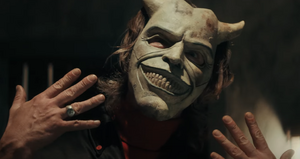 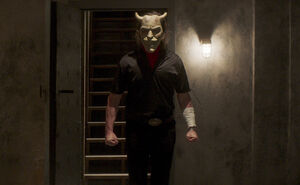 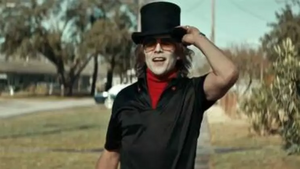 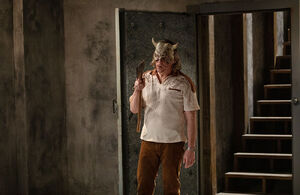 The Grabber after murdering his brother. 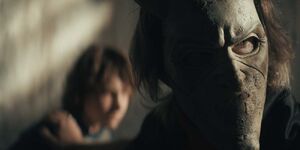 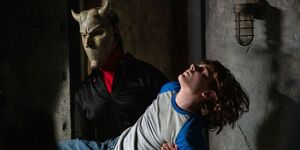 The Grabber carrying Finney in the basement. 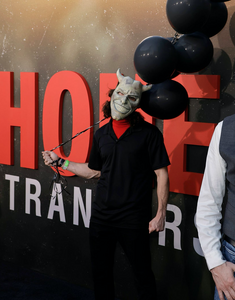 The Grabber at The Black Phone premier. 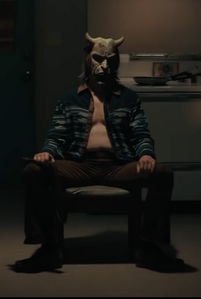 The Grabber sleeping after waiting for Finny to come upstairs. 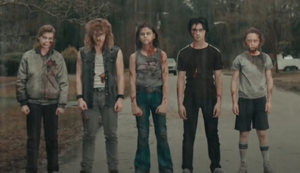 The ghosts of all the child victims of The Grabber.