Villains Wiki
Register
Don't have an account?
Sign In
Advertisement
in: The Simpsons Villains, Monsters, Deceased,
and 24 more

Murdering by eating own victims and extremely slowly devouring them

Eating everyone who harms pumpkins for Halloween (except for yellow pumpkins)

To avenge his species' terrible fates, by killing as much humans as it's possible (briefly succeeded)

The Grand Pumpkin was the main antagonist in the Treehouse of Horror XIX special "It's the Grand Pumpkin, Milhouse!". He is a giant pumpkin with a jack-o-lantern for a head and face, with a slim beanstalk body and leaves for hands and feet. The story is based on a Charlie Brown Halloween special and Milhouse Van Houten takes the role of Linus Van Pelt.

He waits in a pumpkin patch on Halloween night and hopes the Grand Pumpkin to appear. After waiting hours and being teased by his friends, Milhouse begins to cry and his tears on a pumpkin brings the grand pumpkin to life. Milhouse welcomes him and gives him a loaf of pumpkin bread to eat and he gladly eats it. The Pumpkin thinks the bread is made for pumpkins but when Milhouse tells him it was made from pumpkins, he freaks out, regurgitates the bread and yells revenge. He chases Milhouse but sees Homer Simpson making Jack-o-lanterns, which is offensive to pumpkins and eats him first. He then finds Milhouse running into Springfield Elementary and he barges in to find children desecrating pumpkins. Groundskeeper Willie offers him roasted pumpkin seeds and the Pumpkin eats him for "roasting the unborn". He then walks over to Nelson Muntz who tries to protect himself by threatening to stab a yellow pumpkin. The Grand Pumpkin did not care as it was a yellow pumpkin, and he is racist towards yellow ones and that all pumpkins are racists. He then eats Nelson. Lisa Simpson then has Milhouse imagine a giant Thanksgiving-symbolic turkey who can save them and he does. As the Pumpkin contiuned eating Principal Skinner's brains, Tom Turkey barges in and challenges the Grand Pumpkin. Tom Turkey sticks his harvest bugle into the Pumpkin's mouth and blows his brains out. The Grand Pumpkin shouts out saying that pumpkin segregation will live on and dies. His head splits open and everyone he ate is freed (while Homer frantically tries to bury himself in the Grand Pumpkin's corpse). 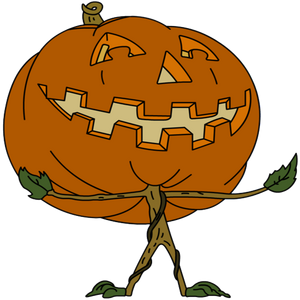 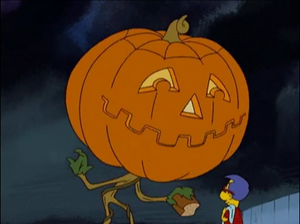 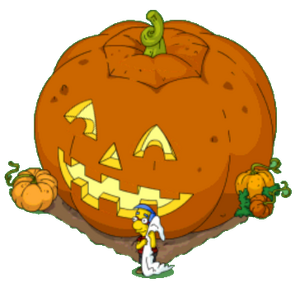 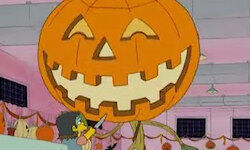