The Grand Pumpkin of Halloween

The Simpsons:
Treehouse of Horror XIX

Racism
Murdering by eating own victims and extremely slowly devouring them

Eating everyone who harms pumpkins for Halloween
(except for yellow pumpkins)

To avenge his species' terrible fates, by killing as much humans as it's possible
(brief succeed)

The Grand Pumpkin was the main antagonist in the "Treehouse of Horror XIX" special "It's the Grand Pumpkin, Milhouse!". He is a giant pumpkin with a jack-o-lantern for a head and face, with a slim beanstalk body and leaves for hands and feet. The story is based on a Charlie Brown Halloween special and Milhouse Van Houten takes the role of Linus Van Pelt. 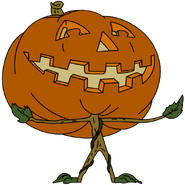 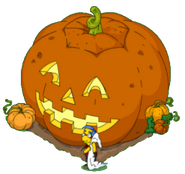 Retrieved from "https://villains.fandom.com/wiki/The_Grand_Pumpkin?oldid=2866578"
Community content is available under CC-BY-SA unless otherwise noted.