Collecting food from all around the world.

The Greedy is a minor antagonist from the 1977 animated musical film by 20th Century Fox, Raggedy Ann & Andy: A Musical Adventure.

He was voiced by the late Joe Silver.

The Greedy is a living pile of sweets made up of all sorts of pastries, cakes, junkfood, fruits, candies, and lots of taffy, and over time, he has collected so many sweets from everywhere due to his obsession with desserts and his naturally greedy and gluttonous nature, causing him to increase his girth and mass and gain an amorphous body shape with impermanent forms, truly being nothing more than a living pool of taffy filled with every manner of sweets that changes form and appearance regularly.

He resides deep within a hole known as the Taffy Pit with all of his sweets. He is continuously eating himself, causing him to be stuck in an endless cycle of eating, as such he is never actually full and always feels empty and hollow, because of this he wants to have a "sweet heart" which he specifically believes will make him whole.

While he comes off as polite at first, he is especially quite rude, selfish, covetous, acquisitive, materialistic, and possessive, so he was unwilling to allow Raggedy Ann and Andy to leave his Taffy Pit when they fell in and upon finding out about Ann's candy heart, he abandoned his patient and respectful nature, and planned to cut her heart out of her body in order to make it his sweet heart.

After becoming angered and destructive by their resistance, he changes his form into a more dark one that spits out root beer in order to drown them, but fails and they manage to escape but not before dropping a huge wad of taffy on him, trapping him once again in his endless cycle of eating. 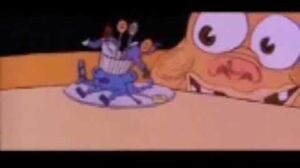 The Greedy
Add a photo to this gallery

Retrieved from "https://villains.fandom.com/wiki/The_Greedy?oldid=3166473"
Community content is available under CC-BY-SA unless otherwise noted.