Destroy warplanes to keep them from going to war, defeat Bugs Bunny (both succeeded until calling a truce with the latter in the end).

He is first seen passing by Bugs Bunny to blow up a warplane's missile while the latter was laughing at the idea that Gremlins are real until he notices the Gremlin trying to blow up a missile with a mallet, unaware of his true intentions.

When Bugs asked the Gremlin "what's all the hubbub bub?", the Gremlin replied that blockbuser buster bombs aka warplane missiles won't go off unless he hits them just right with his mallet, to which Bugs decided to help, still unaware of the Gremlin's true intentions.

When Bugs finally realized what the Gremlin was up to after trying to blow up the missile himself with the latter's mallet, he asked the audience if that little man he encountered was a Gremlin.

Despite looking cute and innocent, the Gremlin is nonetheless a relentless, sadistic tormentor and saboteur whose only goal in life is to destroy the warplanes of military pilots to keep them from going to war. 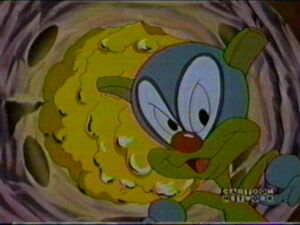