Kidnapping.
Torture (via the electric collar)

Mad Scientist
The Greyface is a one-time antagonist in the Austrian TV-show Tom Turbo.

He was portrayed by Georg Kusztrich, who later played the recurring villain known as the Witcher.

Planning to sell a new chemical that turns animals into savage monsters to the businessman Gustav Geldsack, he hires the criminal Sebastian Schmier, better known as the Ferret, to steal a zoo animal for the purpose of demonstrating the effects of his chemical. Lorenz, the zoo director's son, watches them and tries to warn his father, but he's ignored. Due to not knowing his real name, Tom, Thomas and Lorenz call the scientist the Greyface because of his grey skin.

The Ferret's first attempt fails when the alarm system notices him. Returning to the Greyface's lab, he realizes that Lorenz has been hiding in his van. The Greyface give the Ferret an electric collar to force Lorenz to deactive the alarm system for him. While Lorenz and the Ferret leave, Tom arrives at the laboratory where the Greyface is visited by Gustav Geldsack and his secretary, Frau Kneiffer. The three keep waiting for two hours until the Ferret arrives with a monkey. At this point, Tom comes in, taking the monkey and Lorenz with him, with the latter locking the door. Frau Kneiffer is accidentally injected with the chemical and turns into a savage monster, chasing the three villains. 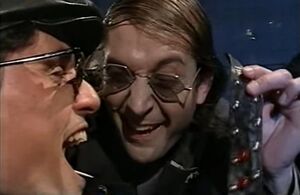 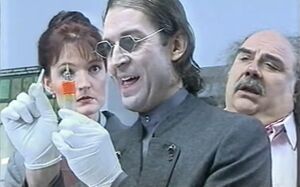 Frau Kneiffer, the Greyface and Gustav Geldsack wait for the Ferret to deliver the animal while the Greyface prepares a syringe. 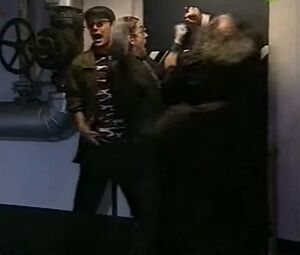 The Ferret, the Greyface and Gustav Geldsack beg to be let out when chased by the savage-turned Frau Kneiffer.