The Groke (Mårran in Swedish) is a mysterious creature from the stories of the Moomins, created by Tove Marika Jansson. She often appears throughout the franchise as the main antagonist, and is considered by many fans to be one of the most intimidating and dangerous characters in children's entertainment in general, especially in European countries such as Poland.

The Groke's body seems to be covered in a large cloak. The original color of the cloak was white, but in later years it has changed to brown, black, or purplish-gray. Her body is almost hill-shaped and at least a head taller than the average human. Her arms are thick, short, and end in long pointy fingers, and her face consists of two small eyes, a wide nose, and constantly visible front-teeth. It was revealed in Who will comfort the Toffle that she has a tail, and her footprints show that she has five toes. But she always hides her feet and tail under her cloak.

Even though it has been said that she is capable of speech, she always expresses herself through growls or moans while confronting other characters. Her face is usually completely expressionless and mysterious, adding to her intimidating and dangerous nature. However, she has spoken sometimes, and in one scene of the anime series while extinguishing the forest she opened her mouth.

The Groke is known and feared as a terrifying and ominous force not to be reckoned with. While it is true that she is prone to anger and fiercely determined, her cause is often justified, like if someone steals her precious King's Ruby. An exception would be in Who Will Comfort Toffle?, where she threatens another character called the Miffle for unknown reasons. It was also stated that she stole her ruby from a wizard, however, this might have been made up by the characters Thingumy and Bob, trying to justify their own theft of the ruby.

But her behavior is also somewhat similar to that of an emotional child. She is easily angered, greedy, and was fully willing to exchange her ruby for a seashell, simply because she found the shell more beautiful. She can also be playful, as shown when she wanted to ride a snow-horse that Too-Ticky had built. But when she learned that the horse was meant for the Lady of the Cold, she quickly backed off in fear. This is specifically understandable, since the Lady is quite cold-hearted and ruthless.

Since she tends to oppose and threaten the main characters, she could be considered an occasional villain. But as mentioned before, her cause is often justified, and whenever she encounters the other characters she usually leaves them alone, unless she has a reason not to. The main reason people avoid her is because the touch of her skin can freeze a person solid, an ability she has no control over. When Moominpappa was young, she had a tendency to chase people in desperate need of company. In the present day, she seems to have outgrown this quirk.

The Groke is often considered one of the most sympathetic and misunderstood villains in fiction, not only by Moomins franchise fans. She seeks friendship, kindness, and warmth, but she is declined by everyone and everything because of her appearance, chilling presence and potentially lethal consequences of her touch, leaving her in a cold cavern on top of the Lonely Mountains. She is both a live representation of loneliness and a psychological depiction of very lonely people who have a hard time accepting and expressing love in the right way, making them seem cold and scary to others, which, in turn, only leads to more loneliness.

A cold blizzard follows her around wherever she goes, freezing the ground beneath her and killing the plants around her. If she stands in place for too long, nothing can ever grow in that spot again. Her mere touch is also said to be able to freeze a person to death, thus scaring away any potential company. Since she has no control over it, it is much more of a curse than a power or part of her (or her species) nature.

The Groke's tail seems to be vulnerable to pain, as the Toffle managed to scare her away by biting it. Also, the only creature she fears – as far as is known – is the Lady of the Cold. 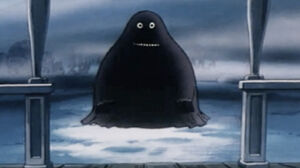 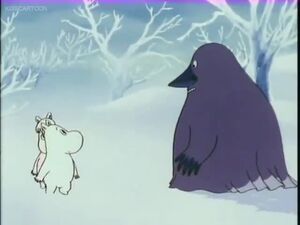 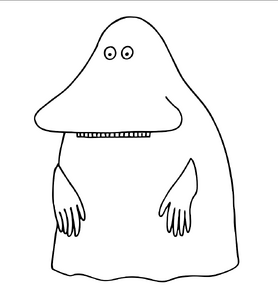 The Groke
Add a photo to this gallery

Retrieved from "https://villains.fandom.com/wiki/The_Groke?oldid=3776403"
Community content is available under CC-BY-SA unless otherwise noted.