To force his students to their full scaring potential.

The Gromble is the main antagonist turned anti-hero of the popular cartoon show Aaahh!!! Real Monsters. He serves as the headmaster of the Monster Academy which the main protagonists attend. He is nevertheless the one most often responsible for making their lives miserable.

He was voiced by Gregg Berger, who also played Jecht in Final Fantasy X.

The Gromble is a rather sadistic monster and a bit of a bully, taking delight in torturing his students both through physical and psychological abuse, though he seems to believe that his methods are justified as he leaves most of his truly wicked abuse for those who perform poorly at their "scare tactics".

Despite his bullying nature the Gromble is very learned and powerful, being one of the few monsters who can hear the Pool of Elders — the source of monster existence that is made of the very substance of fears (though Ickis can also do this, which is somewhat ironic considering Ickis is sweet-natured and lovable, a direct opposite of the cruel Gromble).

Although undoubtedly cruel and malicious it is worth noting the Gromble is actually doing his duty as a monster, seeking to train his students in the ways of scaring humans so that they may become "real" monsters. He is also capable of being pleasant towards those who do well in their tasks (for example he views Oblina as one of his best students and treats her accordingly).

In his own way, he also shows encouragement and support to his students. In the episode Spontaneously Combustible Ickis comes down with a sickness that may cause him to explode, and the Gromble tries to cheer him by teaching the class about famous monsters who had the same disease. Later, when Ickis runs away in humiliation, the Gromble angrily berates his class for letting their fear turn them away from their friend when he needed them, forcing them all to find him again and bring him home.

In the end, his approach may be more 'tough love' than outright malice, his way of pushing students to reach their full scaring potential. At the end of the episode Where Have All the Monsters Gone, he congratulates Ickis for saving the day and tells him he is destined for great things. He then follows up with a promise work him twice as hard from now on.

The episode Quest for the Holy Pail further underlines the connection between the Gromble and Ickis, and gives a hint at the Gromble's past. Ickis is chosen by a supernatural sign to go on the quest for a sacred garbage can. When Ickis returns with nothing but a toothpick, the Gromble reveals that he, too was chosen to go on the same quest and came back with his own toothpick, congratulating Ickis for making the journey. He even, uncharacteristically, rewards Ickis by allowing him to sleep through his boring lecture, knowing how exhausted he was by his quest.

The Gromble is a green-blue color. He has two blue flaps on his head, a red nose, and some blue hair on his chin. His eyes are pink with black pupils. Gromble has four feet with four red high-heel shoes on them. He has a blue tail and black gloves. Gromble's belt is black with a gold or sliver buckle it seems to change on some episodes. 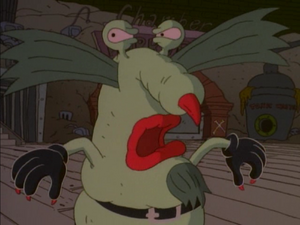 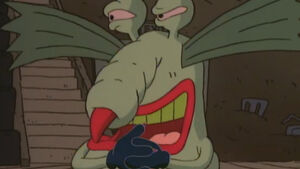 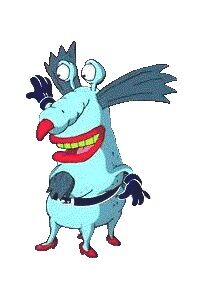 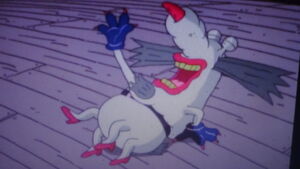 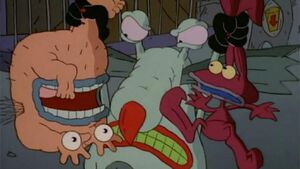 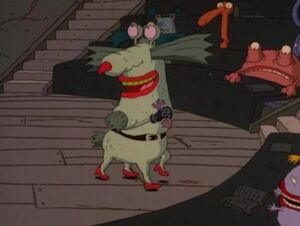 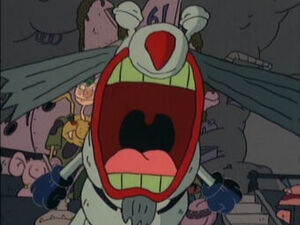 Retrieved from "https://villains.fandom.com/wiki/The_Gromble?oldid=4326224"
Community content is available under CC-BY-SA unless otherwise noted.