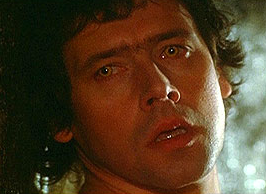 The Groom is a minor antagonist in the film The Company of Wolves, directed by Neil Jordan. He is a werewolf, and it appears in the story of the protagonist's grandmother tells her granddaughter Rosaleen before going to bed.

In the movie, he was portrayed by the Irish actor, Stephen Rea.

The Groom is a young foreigner, who moved to a village, he married a local girl. The wedding night, the boy shows immediately a mysterious person, as it is hidden in a dark corner of the room, and hesitates to be seen in the light of the candles, and timid compliments addressed to his wife, responding to questions in a strange way that she does (when she asks him if all foreigners are as beautiful as him, he replies, "So you think I'm beautiful?" or asks if a defect is the fact that his eyebrows congiungano at the center of the forehead (distinguishing the werewolves).Before going to bed, the man says to the bride who needs to go into the garden, due to "a natural call," and while saying these words, you can see that his eyes have turned yellow. The man then leaves the house and disappears mysteriously, and his wife, seeing him come back, facing the window, seeing, in the garden, a pack of wolves howling at the moon. The next morning, the villagers carry out research, but there is no trace of the groom (probably fled into the woods because he did not want his wife discovered his true nature).

Some time later the woman marries another man gives birth to three children and lives his life quietly, until, one night, the groom return.  The woman, seeing him , it is incredulous and frightened , and when he , with impolite manners , asks him something to eat, they need a bowl of soup . While eating, man becomes aware of the children, and asked him , angrily , where they come from . When she tells him that they are his children , blinded by rage , spilling the table where he had sat and accuses her of adultery and , when the woman tries to justify himself , saying that he believed that the wolves had killed , he says that wolves are better than her and that , if he was still one of them, would give a lesson. After these words, the groom tries to jump on the woman who , to defend themselves, the spilling a pot of boiling water in his face. At this point, the man begins to transform into a wolf tearing his human skin , changing the shape of your body from human to lupine , and covering it with a new hairy skin , under the horrified eyes of the woman and her three children. After the transformation the monster tries to attack them , but at that moment comes the new husband of the woman who grabs a shovel and hit him , and cut off the head of the net , which falls in a tub full of milk , and it re-emerges , transformed back into a head human , with a very sad expression on his face. The woman saw the remains of the groom, said the new husband that he is back as good as when they were married, getting slapped in the face by her husband jealous.