Protect his time portal (Succeeded for a while then failed).

The Guardian is an anti-villain of the Cartoon Network animated series Samurai Jack. Like the Minions of Set, He is a being more powerful than even Jack has ever faced, who guards the time portal. He appears in "Episode XXXII: Jack and the Travelling Creatures".

He was voiced by Kevin Michael Richardson, who also played Demongo and the Pig Sheriff in the same franchise.

The Guardian is a tall, bald, muscular man with blue skin and red circular glasses.

He is incredibly confident in his own strength and skill and loves the thrill of combat. The Guardian's appearance is significant mainly because of the episode he takes part in as it prophesies Jack's eventual return to the past.

The Guardian is extremely dutiful to his duties of protecting the time portal. He will only let the one warrior prophesied to defeat him use it. He does seem to have a sense of mercy. Even though Jack ruined his favorite suit, he offered to let him live if he gave up his desire to use the time portal if he valued his life.

Jack came across to Guardian at the time portal. After discussing the time portal Jack asked him if he could use it but was denied. Guardian explained to the shop to samurai and he has been waiting eons for the right warrior to come feed him and believe that man could not be Jack. He also revealed over the eons that countless warriors have tried and failed to battle him pointing out the remains of all the Warriors and wreckage a Jack saw surrounding the area.

Wanting to return to his time. Jack and shaved his sword to challenge Guardian. Amused that he was going old-school on him, Guardian and shaved his own sword and engaged the samurai. The battle ensued with Jack putting a good fight, but despite using the variety of weapons left lying around from the other fallen Jack was ultimately no match for Guardian whose superior skill set overwhelmed him. In one instance, Jack ruined the prized suit of Guardian. Though enraged, he offered to samurai one last chance to give up and leave

However, the samurai refused and stood his ground. After a short battle, Jack was ultimately defeated in at the mercy of the Guardian. The Guardian was going to crush Jack with a rock but we stopped from a signal by the time portal. Upon the time portal telling him to spare Jack since he is the prophesied warrior to defeat him, he spared his life and patiently awaits the day Jack returns to defeat him in one-on-one combat.

When Jack returns to the Guardian's place (by accident) 50 years later, the Guardian was nowhere to be seen. In fact, all that is left of Guardian was his destroyed eyeglasses and his portal gate has been long destroyed. Therefore, destroying Jack's last hope in returning to the past and having his rematch with the Guardian.

The Guardian would later be avenged after Jack traveled to the past and killed Aku, though it's unknown how the altered timeline affected his existence.

The Guardian is one of the strongest opponents Jack has come across to. He is completely immune to pain, making him tough to a shakedown. Despite his inability to feel pain, The Guardian is still capable of feeling anger, like when Jack ruined his suit. In his own words, the Guardian has been guarding the time portal for "countless eons", and has denied (defeated) everyone who came as only one person has been prophesied to defeat him and gain access to the time portal. Being one of the few characters to have easily defeated Jack without much effort, he appears to be at the same strength as the Minions of Set. In spite of his great strength, he was no match for Aku who destroyed him with no effort. 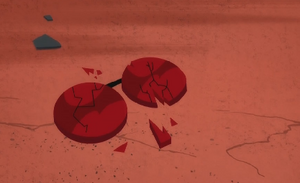 The shattered glasses of the Guardian.
Add a photo to this gallery

Retrieved from "https://villains.fandom.com/wiki/The_Guardian_(Samurai_Jack)?oldid=4038305"
Community content is available under CC-BY-SA unless otherwise noted.