Facilitate the recovery of Earth (succeeded).

Terraform other worlds and transort humanity to them to prevent its extinction (succeeded).
Prevent the allegiance between Anatoray and Disith. (failed).
Have total control over the planet Prestor and keep the war in place for Maestro Delphine's amusement (failed).

The Guild are an interplanetary organization which contains many antagonists in Last Exile and Fam: The Silver Wing, and was once led by Delphine Eraclea. This organization consists of about 23 members.

All members of the Guild are either albino humanoids or humanoids with pale skin but coloured hair (due to their ancestry breeding with regular humans). They also have exceptionally fast reflexes and speed, as well as exceptional leaping ability (demonstrated by Alauda) and while the origins of these abilities are unclear, all members of the Guild are descended from the mysterious Line of White, the origins of which are completely unknown.

While members of the Guild are born without the same ability to process emotion or be as expressionate as regualr humans, due to their individualities male members are subject to chemical and hypnotic mind control at age 17 to ensure that they are completely obeient to the Maestro's wishes (in an annual celebration called Covenant Day), and they are forced to engage in a group battle to the death without most of their memories, to ensure that only the strongest in a generation can survive, and to allow the Maestro to choose a successor.

The Guild once focused on building the Exile ships that allowed humanity to escape Earth, and on fixing Earth so that humanity could one day return. A division of The Guild remained on Earth and operated out of the Ruins of White (pictured on the infobox), and built The Grand Exile.

However, once the largest faction of the Guild and their human passengers reached the planet Prestor, the Guild quickly lost their original purpose of serving humanity when they began manipulating supplies either side of the Grand Stream, forcing Anatoray and Prester to go to war.

Both sides, without realising that they were under Guild's manipulation, came to the Guild to seek help, and the Guild set up rules of engagement or "Chivalry", by which each side had to fight. The Guild had the ability to retract any ship's Clauia tanks (which they supplied to all ships on Prestor), causing the ships to crash at their will, thus giving the Guild complete control over both sides.

After centuries of pointless warring, Anatoray worked out how they could come to a peace arrangement with Disith, and they sent vanship pilots Hamilcar Valca, Georges Head, Alex Row, and his fiancée Euris Bassianus (herself a member of The Guild) to deliver the message to Disith so that proper negotiations could begin, but the Maestro (Empress) of the Guild, Delphine Eraclea, intercepted them in the Grand Stream aboard the Exile, the defenses of which easily killed all of the Vanship pilots, (except Alex Row who fled after seeing Euris die) while Maestro Delphine watched, smiling. This led to Alex realising the Guild's true nature and becoming the Captain of the Silvana just to wage war on the Guild and have revenge by killing Maestro Delphine.

Delphine was only able to maintain control over Anatoray and Disith using the Exile's power, and when other families of the Guild (who contained individuals that were "Keys" of Exile, i.e. were born with the power to open and control an exile, when they hear and complete a Mysterion poem) refuse to tell her their Mysteria, Delphine has them all killed, forcing her to look elsewhere for the Mysteria so that she can once again wield the Exile as a Weapon.

The Guild spent many years chasing Alvis Hamilton (a Key of Exile and the only survivor of the purged Guild family Hamilton) down, so that she could obtain her Mysterion, but fails to captuure her after she joins Alex Row aboard the Silvana.

When The Guild attacks The Silvana under the command of Lord Dio Eraclea (the Maestro's brother), Dio becomes fascinated by the skills of the Silvana vanship pilot Claus Valca, and decides to "dogfit" him personally in the air, alongside his (dio's) trusty navigator and best friend Lucciola. During the fight, Dio realises that Claus's skills rival his own, and he elects not to kill Claus, but instead toys with him in the air before ordering his ship and fighters to retreat, so that he can learn more about Claus.

Dio and Lucciola later join the Horizon Cave Eight Race just so that Dio can test his kills agaist Claus, and after losing to Claus, Dio and Lucciola join the Silvana and betray the Guild, partly due to Dio's growing obsession with Claus, and partly due to him being utterly terrified of his sister and wishing to fight back against her. Soon after, another Guild force arrives under Maestro Delphine's orders, and opens fire on Horizon Cave.

While onboard the Silvana, Dio tests Alvis by speaking the Mysterion to her, an her power as Key to Exile causes the entire Silvana to shake. Months later, the Silvana is joined in its war against The Guild by both Anatoray and Disith, who form The Alliance to ensure peace can be restored. Maestro Delphine acknowleges this threat to Guild control, an openly declares war on the Alliance during Empress Sophia's coronation, by sending a giant Guild ship down upon the ceremony which sprinkles thousands of red rose petals all over thee ceremony, sending Dio into a horrified panic. Alex Row realises from the rose petals that Maestro Delphine is on board, and demands that his crew shoot down the Guild Ship, but the entire crew refuses to avoid letting the ship fall and kill Empress Sophia. Resultantly, the giant vessel flies away without damage. In resonse to the alliance, Maestro Delphine recalls the Claudia units of every ship delivering water to rought stricken areas, causing all such ships to crash, likely killing thousands of people, and indirectly hundreds of thousands.

On Covenant Day, Maestro Delphine and Cicada lead a force which attacks the Silvana, captures Dio, Alvis Hamilton, Alex Row, Lucciola and Claus Valca, and then brainwashes Dio to become obedient to her will, forces him to compete in the Covenant Day death match,and then murders Lucciola.

During the battle outside, the Alliance fleet heads for the Grand Stream with the objective of killing Maestro Delphine. They engage a number of Guild Battle Ships in aerial combat. While the cannons of the Anatoray Battle Ships are unable to penetrate the armor of the Guild warships, the vanship squadrons are able to sink many of them with a torpedo attack. Maestro Delphine orders the remaining warships to fall back to Exile's location, and the Alliance fleet pursues them into the Grand Stream.

The Alliance battles through Exile's defences before discovering its true nature, at the expense of countless lives, and Alex is captured and crucified by Maestro Delphine aboard the Guild Fortress in the Grand Stream. However, he tears his hands free of the cross, and strangles Delphine to death.

Minutes later, the Silvana lead Alliance fleet attacks the Guild Fortress, utterly destroying it and ending the Guild on Prestor.

Many smaller divisions of the Guild survived however, including the one that contained Luscinia Hāfez and Alauda Hafez, who intended to use the Grand Exile to ensure that all wars on Earth ended, at any cost, and that all those who returned to Earth and displaced its inhabitants were exterminated. 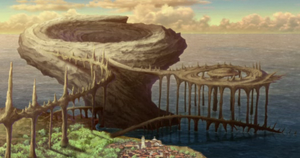 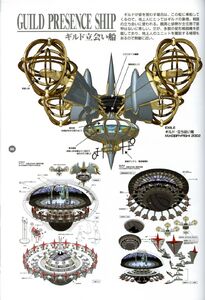 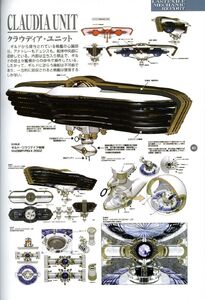 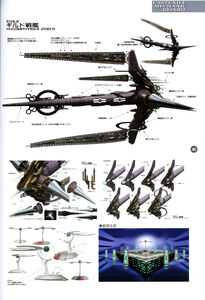 Retrieved from "https://villains.fandom.com/wiki/The_Guild?oldid=3553774"
Community content is available under CC-BY-SA unless otherwise noted.