Defeat anyone in his way (failed).

The Hammer is a villain in the Regular Show TV series. He serves as the main antagonist in the episode "Rage Against the TV".

He was voiced by Sam Marin.

When Mordecai and Rigby are playing a video game they face the final boss of the game "The Hammer". They try to fight him but is to strong for punches and takes out a whole life with just one punch from him. They soon find out that his weakness is furniture so they about to take him out when suddenly their TV's screen breaks, forcing them to pause the game. Rigby tries to fight him alone but can't do it, so Mordecai and Rigby go out to look for another television. They try asking their friends for one but to no avail. They then see an add for the TV store warehouse which states that they give away TV's for free. With Pops, Muscle Man and Hi Five Ghost in tow they all go to the store. However they can only get an old foreign TV due to the others being to expensive.

At the house they quickly realize that the TV they bought doesn't have the right hook ups. So, with help from Skips they upgrade the TV with parts from Muscle Man's TV and Pop's radio. When they turn it on it works perfectly when suddenly a power surge emerges and causes the TV and it's components to form into The Hammer himself. The Hammer then starts attacking them and clobbers all the park employees. With Mordecai and Rigby recalling his weakness, everyone starts hitting the Hammer with furniture. After betting him in real-life Mordecai and Rigby grab the control pads and defeat The Hammer in the game, causing the foreign TV to break.

He returns in "Exit 9B" as one of the many villains revived by Garrett Bobby Ferguson Jr. He then fights the God of Basket Ball and gets sucked back into the portal after Thomas signs the document. In "Expert of Liar" he is one of the challenges Rigby faces for answering 10 video game related questions. 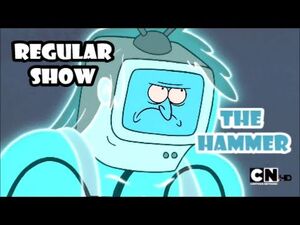