The Beast of the Hand (their deity)

Spread The Beast of the Hand's dark influence over the world.

Gain evermore powers from the Nest of the Hand.

The Hand is an evil cult-like organization of assassins and a recurring antagonistic faction in the Marvel Comics universe. They are enemies of Daredevil and other superheroes. On top of that they are the main antagonists of the New Avengers comic series.

The story of the group known as the Hand truly begins centuries ago, in feudal Japan. Seeking autonomy from the oppressive class system of the time, a few citizens fled into the mountainous regions of Iga and Kōga. There they developed ninjutsu, a stealthy martial art perhaps inspired by Sun Tzu's The Art of War.

Over a period of centuries, they refined their art in secluded camps. Students trained and practiced the art from birth, playing children's games designed to impart expertise in unarmed combat, swordplay, weaponry, camouflage, escape and evasion. Ninjutsu was also designed to encourage spiritual growth by pushing oneself physically and mentally beyond normal human limits. The ninja were expert in espionage and assassination, and offered their specialized services to samurai warlords and others who could afford them.

Kagenobu Yoshioka officially brought them together in 1588. The Hand covets power above all other objectives. They are primarily based in Japan, but operate internationally. They operated as a secret society of Japanese nationalist samurai but were soon co-opted by the Snakeroot, an ancient ninja clan which serves a primordial demon known only as The Beast.

Elektra originally belonged to the Chaste. As a self-imposed test, she joined the Hand. When they forced her to assassinate her former mentor, she abandoned the Hand and the Chaste and became a freelance assassin. In that capacity she encountered Daredevil, who once trained under the Chaste's leader, Stick, and helped both of them survive an attack by the Hand.

In an offensive against the Chaste, the Hand lost its best warrior, Kirigi. A later battle brought forth the Chaste's ultimate weapon, a ritual that literally drained the life from the Hand's attackers. Unable to contain so much energy, however, Stick and Shaft also died.

The Hand tried to prevent the reincarnation of Stick. The Chaste enlisted Daredevil once again, who traveled to Japan and helped to protect the infant who bore his sensei's spirit.

The Hand has also crossed swords with Wolverine, Spider-Man, the Punisher, the Avengers, and the X-Men. More than anyone else (excepting Elektra), however, they have interacted with Psylocke.

Members of the Hand are practitioners of powerful occult magic and can murder a person and bring that person back to life as a servant of the Hand. Only Elektra, Psylocke, Northstar and Wolverine are known to have reversed this programming. Wolverine was brainwashed in a combined operation by the Hand and Hydra during which Gorgon took the control of both the Hand and the Hydra. Brainwashed Wolverine began to kill superheroes to make them revived and mind-controlled by the Hand, and managed to kill the President. Finally returned to himself Wolverine alongside Elektra fights Gorgon and kills him. After this Elektra becomes the leader of the Hand.

Elektra led the Hand for some time but was killed and found out to be a Skrull, temporarily leaving the Hand without a warlord. One faction, led by Lord Hiroshi and his lieutenant, Lady Bullseye, aimed to make Daredevil their new leader, an offer the latter rejected, only to be told that "the Hand doesn't take no for an answer."

They then instigated the return of the Kingpin to New York City, with the goal of offering him the leadership instead. However, this was preempted by Daredevil, who accepted their offer, on the condition that the Hand should not do business with the Kingpin or Lady Bullseye again. The three remaining ninja-lords accepted this arrangement through a twisted turning of events, a battle waged between Lady Bullseye, the Kingpin and Daredevil.

Proclaimed the winner, the Hand is now under the leadership of Daredevil. With assassins obeying every order, time will tell if this clan will allow the fighter of the great-good lead them into a new era. In observance of their new master, the ninjas adorned Daredevil inspired regalia. With Norman Osborn in control of law enforcement and the justice system, and criminals secretly doing their business with Osborn's blessing, Daredevil seeks to use the Hand to fight back Osborn's system of corruption and power.

After the Beast was dispossessed from Daredevil, Kingpin took the leadership of the ninja group, with Lady Bullseye, Thyphoid Mary, Montana and Hobgoblin as his henchmen.

Now Fisk uses the Hand to his criminal purposes.

The Hand are more of a council than a assassin group but have formidable members and soldiers who fight to the death. The Hand is featured as the villain group. It is led by Master Roshi and features some of its deadly members including Kinkou, Tattoo, Typhoid, Stone, and Roshi's own son, Kirigi. The regular Hand ninja are clad in black.

While originally only lightly referenced in Season 1, the Hand becomes the central antagonist for Season 2. The members of the Hand present in the series are Nobu and Madame Gao.

Madame Gao returns as one of the antagonists in Season 1. This season also introduces Bakuto, one of the five fingers of the Hand alongside Gao.

The Hand is the main antagonist of the crossover series. In it, viewers get introduced to the other fingers of the Hand (Sowade/White Hat, Murakami and Alexandra Reid). The origin of the Hand is also revealed in the series, as well as their master plan. 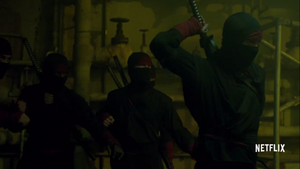 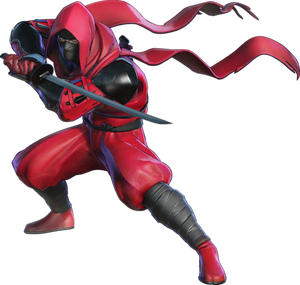 The Hand Ninjas in Marvel Ultimate Alliance 3: The Black Order.