NOTE: This article is about the incarnation of The Hand from the Marvel Cinematic film series. The mainstream version can be found here: The Hand (Marvel).

Originally monks of the Order of the Crane Mother, 5 heretics used their knowledge and teachings of the Chi to discover a method to cheat death. These five heretics, Alexandra Reid, Madame Gao, Bakuto, Murakami and Sowande, were banished from K'un-Lun forever as punishment for their actions and later founded and became the five fingers of the "Yami no te", otherwise known as the "Hand". Each founding member returned to their homeland to establish their own criminal empire, influence powerful people and create wars and conflicts throughout the years.

Eventually, the Hand discovered the secret of immortality in East Asia through the substance of dragon bones. In order to find more of this resurrection substance, the Hand would dig holes under cities containing dragon bones beneath them. This has resulted in the destruction of several cities, such as Pompeii and Chernobyl. With this substance, the Hand's leaders have been able to live and grow their power bases for centuries, all with the purpose of fulfilling their ancient mission to locate and retrieve their ultimate weapon known as the "Black Sky" and use it to return home to K'un-Lun.

In time, the Hand gained various enemies, powerful or otherwise. The Order of the Crane Mother trained several great warriors in K'un-Lun to defend and fight off the Hand. They would choose an individual known to them as the "Iron Fist", a warrior with the power to channel their Chi into their fist to create a powerful and unbreakable weapon, to guard the gate into the city whenever the gate between the city and the rest of the world opened every 15 years.

Stick, an enemy of the Hand, also told his student Matt Murdock/Daredevil a story about a boy that survived the Hand's wrath in ancient times, who then used a knife pulled from his mother's dead body to cut down the group's strongest warriors. This boy would grow up to recruit more people to his cause and fight the Hand, becoming known as the "Chaste". Stick was a member of the Chaste, as was Elektra after her abduction from the Hand as a young girl; the current leader of the Chaste appears to be a heavily-scarred man named Stone.

Murakami is a branch leader of the Hand who led this faction, but due to his preference to work in secret, had his subordinate Nobu Yoshioka act as the "face" of his group while he gave him commands from the shadows. His faction is first introduced in the first season of Marvel's Daredevil. It seems to be the faction most focused on the Hand's ancient goal of locating the Black Sky, the Hand's ultimate weapon. Nobu and fellow branch leader Madame Gao serve as business partners of Wilson Fisk. Nobu is killed in a battle with Daredevil, orchestrated by Fisk who had wanted to get rid of Nobu, but he is later resurrected with the help of his followers.

Nobu and his faction return in the second season, once again attempting to locate the Black Sky. Investigating Nobu and the Hand's activities in New York, Daredevil learns that the Black Sky is in truth Elektra Natchios, who is approached by Nobu and invited to lead the Hand. Although she is tempted, Elektra refuses when Daredevil convinces her not to join the Hand. In the resulting brawl, Nobu accidentally kills Elektra and is defeated by Daredevil once again. Nobu is later decapitated shortly after by Stick, preventing him from being resurrected again.

Bakuto is another branch leader of the Hand. His faction first appears in the first season of Marvel's Iron Fist. Bakuto and his faction train recruits, who mainly consist of children who had a bad childhood or no opportunities in life, at the Hand Safe Haven in the countryside. He also trained and recruited Colleen Wing into the Hand, gifting her with her own Dojo to train more new Hand soldiers. Though Bakuto and his goals seem benevolent at first, it's revealed that he brainwashes his students into obedience. Once the students leave the Hand Safe Haven to become part of society, they still remain loyal to the Hand and give Bakuto influence over multiple sectors. He also punishes those who are disobedient or useless to him with death.

After learning of the Iron Fist, Bakuto makes it his goal to turn Danny on to his side. After this fails, he blackmails Danny by threatening his friends, the Meachums. To save the Meachum's, Danny surrenders to Bakuto who reveals that he will help Danny uncover his true potential and that there is someone - a higher power than Bakuto - who will be thrilled to work with Danny. However, before Danny can be brought to said person or before Bakuto can reveal more, Danny frees himself. Danny's friends Colleen and Davos turn up as well and Bakuto is ultimately slain.

However, members of Bakuto's Hand faction recovered his body and were able to resurrect him. Bakuto's faction also abandons the Hand Safe Haven, as when Danny Rand returned there, all the Hand warriors and students were gone.

Madame Gao is a branch leader of the Hand, as well as a Chinese crime lord and leader of a drug trafficking ring. She first appears in the first season of Marvel's Daredevil. However, her faction and affiliation to the Hand is not revealed until the first season of Marvel's Iron Fist. She and her faction of the Hand focus on drug trafficking, running her own synthetic trade of heroin throughout New York City.

Gao's faction managed to infiltrate the company Rand Enterprises by striking a deal with CEO Harold Meachum. Using Rand Enterprises resources, Gao quickly became the biggest drug dealer in the city. Harold also made a deal with Gao to arrange the death of his business partner Wendell Rand, making it look like an unfortunate plane crash. When Harold was diagnosed with cancer, the Hand offered him a deal: resurrection in exchange for servitude. Harold accepted and was resurrected by the Hand.

The Hand then used Harold, who still had influence over Rand Enterprises through his son Ward, to make business decisions in favor of the Hand. One of theses decisions was the purchase of a pier, which the Hand then used to smuggle a scientist into the country to invent the synthetic heroin which Gao's faction distributed into the city.

Eventually, Gao was captured by Danny Rand and held captive in New York. Bakuto turned up later and, feigning friendship to Danny, managed to bring both Gao - who recognized him as another Hand leader - and Danny into the Hand Safe Haven. There, Bakuto had Gao imprisoned in a cell. With Gao out of the picture, Bakuto managed to take over a portion of Gao's Hand branch but was later killed by Danny Rand and his friends. However, Gao's followers managed to help her escape her cell and she continued her operations for the Hand.

Sowande is a branch leader of the Hand as well as an African warlord. He and his faction appear in the first season of Marvel's The Defenders. Sowande recruited several young men in Harlem to act as a cleanup crew to cover the Hand's activities, such as eliminating members of their enemies, the Chaste. Once the men served their purpose or were arrested by the authorities, Sowande would arrange to have them killed to remove all loose ends.

Sowande and his men ambushed and attacked the Defenders at the Royal Dragon, where he personally fought with Luke Cage. However, Luke defeated and captured Sowande and brought him to the others to be interrogated. Sowande later managed to escape his confinement and capture the Iron Fist, but was decapitated by Stick before he could escape, killing him and preventing him from being resurrected. 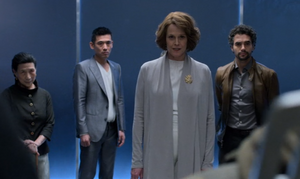 Leaders of the Hand 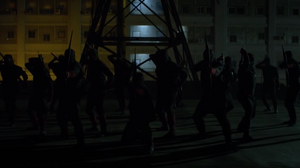 Members of the Hand