Teaching people how to admit Number 5 at all time.

To eliminate Number 5 and kill Vanya Hargreeves at all costs. (failed)

The Handler was a high-ranking and major influencer of the Temps Commission. She was the main antagonist of the Neflix TV Series The Umbrella Academy. She was frequently seen dealing personally with matters concerning Number Five and the apocalypse, despite not being the case leader.

The Handler had a clear agenda in her belief that time should not be changed, going to extreme lengths to maintain the timeline and ensure nothing is changed.

She was portrayed by Kate Walsh.

The Handler was a brilliant woman who had glasses on when Number Five sees her in her wardrobe when she waves at her from her Time-Traveling where she was talking about Hazel & Cha Cha.

But in Episode 6, she teaches Number 5 a spectacular gadget with her own way they make sure to help each other.

But when Number 5 finds out that the Handler's officials can became, but when came in, she was shot. 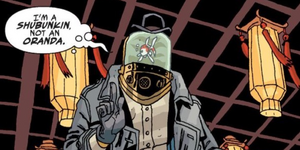 Retrieved from "https://villains.fandom.com/wiki/The_Handler?oldid=3569507"
Community content is available under CC-BY-SA unless otherwise noted.