Latch itself to Carly Beth's face (all failed).

The Haunted Mask is a major antagonist in the Goosebumps books and TV show. It is a mask that will possess whoever wears it. It is also the secondary antagonist of the movie Goosebumps: Haunted Halloween.

The mask is cruel and sadistic, taking pleasure in tormenting it's victims. It is also very cunning, being able to think up lots of evil plans. It also might be rather sensitive about it's appearance, as it get's provoked easily when people call it what it really is, a scary mask.

The mask appears as a hideous goblin-like creature, with oily green skin and razor sharp teeth.

The mask, along with the other "unloved ones", was once a beautiful face, that where made to hide a insecure shopkeeper's face. However, the shopkeeper's dark thoughts began to rot and decay the mask, to a hideous state. This caused the mask to become cruel and evil.

The mask get's stolen by a young, bullied girl, named Carly Beth, who stole the mask to scare her school bullies. The mask started off by making her a little rude, than narcissistic, than violent. She began to attack her friends and get extremely hot headed. She soon realized that it was truly the mask who was behind all of this, and decided to take it off. Only thing was, that mask had gotten stuck to her face, and wouldn't come off. She soon realized she needed to except who she was as a person to defeat the evil of the mask. So she did this, and then buried the mask where no one could find it.

Later on, the shopkeeper, hellbent on killing the mask once and for all, dug up the mask and tried to burn it. The mask leaped onto his face and made him go around causing terror. But the mask soon realized, that the body it had chosen was weak and decrepit. So it created a new mask to continue it's evil.

"The Scream of the Haunted Mask"

The mask appears in The Scream of the Haunted Mask as the primary villain.

The Haunted Mask makes a slit second cameo in the 2015 Goosebumps movie.

The Haunted Mask makes a appearance in Goosebumps: Haunted Halloween (the sequel to the 2015 movie), as one of the haunted costumes that Slappy recruits to take over Halloween, except her the mask is shown as a big dumb brute that possesses a convivence store clerk.

The Haunted Mask is a unlockable monster in the video game Goosebumps: HorrorTown. 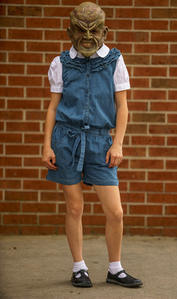 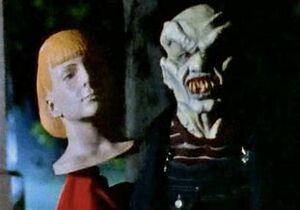