Use of his handheld sledgehammer

Use of his chainsaw
Murder expertise

Taking revenge on everyone that mistreated him.
Sacrificing survivors to The Entity.

Give himself a name.

Escape his confinement.
Kill his parents (all succeeded).
Sacrifice survivors for The Entity (currently).

Max Thompson Jr., better known as The Hillbilly, is one of the playable Killers in Dead by Daylight. He is a deformed farmhand-turned-killer that experienced constant neglect and abuse from his parents before murdering them in a fit of rage.

He is voiced by Filip Ivanovic, who also voiced The Trapper, The Wraith, The Nightmare, and The Cannibal.

Hillbilly appears as a tall, lanky, deformed man with visible bones such as his spine. He wears an old tattered tank top and jeans with a belt and a pair of black boots. Hillbilly always carries his brutal cattle hammer and chainsaw. He also walks with a limp after taking a gunshot wound in his knee.

Max Thompson Jr. was born deformed and his parents treated him like dirt. He grew up imprisoned in his own room locked from the outside world with his only outside influence is the hole in his room where his parents feed him. The abuse continued until he got older and eventually snapped and killed his parents in revenge.

At some point, he was found by The Entity and became one of his servants hunting down survivors with his hammer and chainsaw. His "memento mori" involves him using a chainsaw on the survivors on the ground.

Before he took on the name Max Thompson Jr., he was only referred as "Boy". The Thompson family was regularly visited by the corrupt police chief, whom was a family friend. "Boy" resented him and his deputies due to them tormenting him instead of protecting him. His father Max Thompson Sr. regularly told him to slaughter the livestock, saying that was his only purpose, while the chief watched. Max Sr. taunted his son, boasting about how even the pigs were given names and not him. This caused "Boy" to snap and kill his father and several of the deputies.

He confronted his mother, whom was injured during the rampage, screaming and begging for her to say his name. After killing her, he angrily gouged out her eyeballs due to her only seeing him as a freak and not a son. The police chief found out and got his deputies to chase after the killer. He tried to lure him in with hurtful words, but "Boy" beckoned for the deputies to come toward him so he could also kill them in retaliation for their abuse. He killed one of the deputies by splitting his head with his cattle hammer, causing another to run away in fear. All the while, "Boy" felt the smashed brain and enjoyed squeezing at it. He began to think about TV, the only thing that made him happy for all of his years in confinement, thinking about his hopes that a hero like Superman would save him from his miserable life. But TV wasn't real and he was alone, so he decided that he would be his own kind of hero.

The police chief beckoned for "Boy" to come over, but he would kill all of the deputies who came after him, reminding him of a cowboy movie. "Boy" tried to imagine a life when things would be normal, until his parents abused him over the sound of his voice, which only strengthened his hatred towards his family. The chief found him, telling him that his father thought that he was a freak of nature, which was why he was hidden away. But then, "Boy" seized his opportunity to get revenge by killing the chief, only to be stopped by the dogs. "Boy" killed the dogs and ran all the way back to his house, to the room where he was abused, where he would hide from his pursuers. He took on the name Max Thompson Jr. after his father, and decided to cook bacon made from his victims' guts. 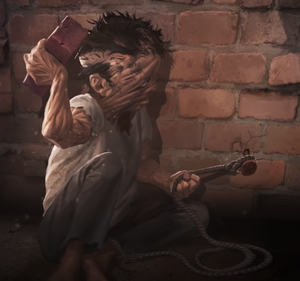 Max Thompson Jr. as a child. 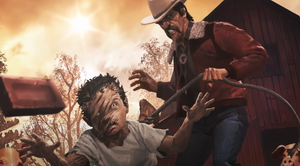 Max Thompson Jr. being abused by his father. 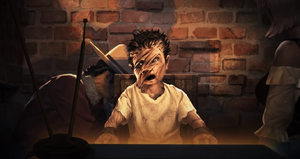 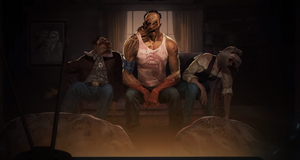 The Hillbilly after killing his parents. 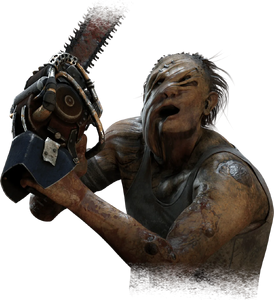 The Hillbilly at Dead by Daylight Wiki