The Horde (She-Ra and the Princesses of Power)

Evil Horde (according to Bow)

Decades prior to the series

Defeat the Rebellion and conquer all of Etheria (failed).

The Horde was founded by Hordak after his ship crash-landed on Etheria decades ago. Under Hordak's leadership, they took over most of the planet. However, after Adora defected to the Rebellion, the Horde began to experience a string of defeats.

It's later discovered that they are an offshoot of the Galactic Horde, an intergalactic empire led by Hordak's creator Horde Prime.

Decades prior to the series, one of Horde Prime's clones became stranded on Etheria after his ship crash-landed in the Scorpion Kingdom. The clone named himself "Hordak" and formed his own faction of the Horde on Etheria. Using his knowledge of technology, Hordak created advanced weapons for the Horde which quickly made them one of the most powerful armies on Etheria. Under Hordak's orders, the Horde then set out to conquer Etheria. A flashback in "Light Spinner" shows that Scorpia's people were amongst the first to be conquered by the Horde. After taking over the Scorpion Kingdom, the Horde renamed it the Fright Zone and used technology from Hordak's ship to build a military fortress over the remains of the former kingdom.

Despite their early actions, there were some that didn't consider the Horde to be a serious threat. Residents of the kingdom of Mystacor were largely ignorant of the Horde's early actions and the Sorcerers' Guild was unwilling to get involved due to their belief that Etheria's princesses were capable of handling of the Horde.

At some point, the Horde was approached by a sorceress known as Shadow Weaver, who offered her extensive knowledge of Etheria's magic and lands to Hordak.

The Horde easily conquered large swaths of the planet, as many kingdoms lacked the Horde's industrial capability and advanced technology. The only meaningful opposition they faced was from the Rebellion and the Princess Alliance. However, after the Horde captured the Rebellion's leader, King Micah, the Princess Alliance dissolved and the Rebellion diminished as a threat. The Horde was unable to invade Bright Moon because it was surrounded by the Whispering Woods, which made travel nearly impossible.

At the start of the first season, the Horde was winning the war against the Rebellion, which was only able to take part in relief efforts or evacuations. The Horde had also begun cutting down the trees of the Whispering Woods in order to carve a path towards Bright Moon. Their forces were also laying siege to the kingdom of Plumeria and raids against villages were common. Around this time, the Horde was planning an attack on the civilian village of Thaymor as part of their deforestation of the Whispering Woods.

In the episode "Light Hope", the Horde's recent string of defeats causes Hordak to demote Shadow Weaver and make Catra his new second-in-command.

As a result of Entrapta's tinkering with the Black Garnet, this creates chaotic weather patterns throughout the entire planet. This causes it to snow in the Whispering Woods, freezing over the entire forest. This allowed the Horde to march on the kingdom of Bright Moon. Under Catra's orders, a large attack force is sent to Bright Moon with the objective of destroying Bright Moon's runestone. This would create a chain reaction that would ultimately disable every Runestone on the planet. However, the Horde's army was ultimately defeated by the Princess Alliance and forced to retreat.

After the Whispering Woods were frozen over, large numbers of Horde Bots were sent into the forest only to be destroyed by the Princess Alliance.

Many of the Horde's officers and soldiers were gathered by Hordak in his throne room to witness Catra's punishment. Hordak intended to use Catra as an example of what happens to failures and sent her on a suicide mission to the Crimson Waste. After Catra took over the Crimson Waste and captured She-Ra, she and Scorpia briefly considered leaving the Horde.

However, she changed her mind and delivered Adora back to the Fright Zone. When the Princess Alliance infiltrated the Fright Zone with the help of Shadow Weaver, several Horde soldiers attempted to fight them off to little success. After Catra activated Hordak's portal machine, everyone on Etheria, including the Horde, was sucked into an alternate reality where everything was "perfect".

In this "perfect" alternate universe, Adora had never left the Horde and thus had been promoted to Force Captain instead of Catra. During a Force Captain orientation, it was mentioned that the Horde was ready to conquer Etheria with Salineas being their first target. However, reality began to collapse in on itself. Everyone in the Horde was presumably consumed by the collapse of reality and later brought back by She-Ra.

At the start of the fourth season, Catra overthrows Hordak and becomes co-leader of the Horde. Under her new leadership, the Horde launches an all-out attack on the kingdom of Salineas, successfully conquering the kingdom and gaining control over Etheria's seas. However, due to Scorpia's defection, Catra enters an emotional breakdown which causes her to make several irrational decisions. This includes lashing out at her own subordinates, forcing the Horde's soldiers to works for days on end with no rest, and stretching the Horde's forces too thin.

During the season finale, Catra gathers the majority of the Horde's forces to attack Bright Moon after receiving intel that She-Ra was absent. This turned out to be a trap set by Glimmer and all of the Horde's armies were ambushed by the Princess Alliance.

By the end of the fourth season, the Etherian Horde was all but wiped out. The majority of their military forces were decimated by the Princess Alliance, the Fright Zone was left in ruins from Hordak and Catra's fight, and both Hordak and Catra were abducted by Horde Prime.

The Horde is a colonialist military dictatorship. While Hordak is the Horde's leader, most of the administration and day-to-day workings are handled by Hordak's second-in-command. The second-in-command is also responsible for carrying out Hordak's orders and oversees the training of Horde cadets.

The Horde's military is directly under the control of Hordak. However, similar to the Horde's governance, most of the day-to-day affairs and administration is handled by his second-in-command. The second-in-command is responsible for ensuring that the army is able to function and handles the military's logistics such as troop movements, weapons, and armor.

The Horde also makes use of a large number of Horde Bots, combat drones with a spherical body and three legs.

The Horde has control over most of Etheria. They also hold control over several kingdoms. The Scorpion Kingdom was the first to be conquered by them. After Entrapta's defection, the Horde also gained control of the Kindom of Dryl. In Season 3, they acquire the Crimson Wastes after Catra seizes control from Huntara and Tung Lashor. In the fourth season, they conquer the kingdom of Salineas.

The Horde also has other bases and outposts scattered throughout Etheria. Their military has a significant presence near the Whispering Woods. They also established a base near the Kingdom of Plumeria, although it was later destroyed by She-Ra. The Horde also has a small research outpost in the Northern Reach. Lastly, they claim Beast Island as part of their territory, although it serves as a penal colony and the Horde lacks a true presence there.

The Horde has a very militaristic culture. Children are trained from infancy to fight in the Horde's armies and live a minimalistic lifestyle. Children in the Horde don't have a concept of extended families, as Adora was unaware of what an "aunt" was. There also appear to be little-to-no luxuries for most soldiers, as Catra was unfamiliar with what a "party" was and most of the Horde's food is shown to be ration bars.

According to Horde propaganda, Etheria's princesses are evil tyrants and the Horde is a noble army that seeks to "liberate" Etheria from their rule. Horde recruits are taught that Etheria's princesses are dangerous instigators who are unable to control their powers. During Force Captain orientation, the Horde sergeant describes princesses as being "devoid of conscience". Horde cadets are shown images that depict princesses as frightening monsters. One training simulation is focused around "liberating" the kingdom of Bright Moon from the "evil queen". Children growing up in the Horde are told ghost stories about evil princesses. The demonization of princesses is so widespread that many in the Horde assume that the Horde's propaganda about princesses is common knowledge.

Despite this, the Etherian Horde is shown to be extremely egalitarian and meritocratic in practice. Sexism is nonexistent as both officers and soldiers consist of an equal number of males and females. It's also shown in the first episode that Horde cadets share sleeping quarters regardless of their gender. Age is also not a barrier as Adora was made Force Captain despite just graduating as a cadet. Catra eventually became Hordak's second-in-command despite still being a teenager. Furthermore, individuals are not discriminated against for their sexual identity, as Double Trouble was always referred to using gender-neutral terms by the Horde's soldiers. Even princesses, despite being demonized by the Horde, are permitted to join. Scorpia, a former princess, was given the rank of Force Captain and Entrapta, a member of the Princess Alliance, was given full access to the Horde's technology once she proved herself useful. In fact, one of the Horde's main recruiting methods is to claim that the Princesses would reject anyone that was "different" from them.

The majority of the Horde's soldiers appear to consist of humans and anthropomorphic lizard people. Oddly enough, with the exception of Scorpia, there are no Scorpioni (humans with scorpion claws and tails) despite the Fright Zone being built above the former Scorpion Kingdom.

The Horde's forces on Etheria have access to hovering vehicles, laser weaponry, and holograms. They are also proficient in robotics as both make use of combat drones. On Etheria, all of the Horde's technology was developed and created by Hordak in his lab. The Etherian Horde makes use of flying skiffs, stun batons, laser hover tanks, and other futuristic technologies. 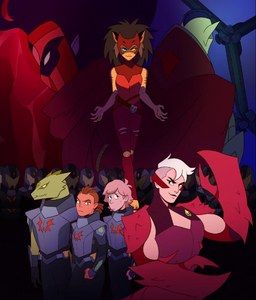 The Horde in the Season 1 to 3 intro 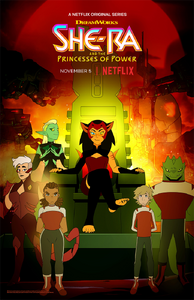 The Horde in the Season 4 poster.