The Hunters are a group consisting of three assassins. They are sent by the Time Masters to kill Rip Hunter and his team. The Hunters are minor antagonists in Legends of Tomorrow.

After Chronos failed to bring in Rip Hunter's team, The Hunters were sent by the Time Masters to kill both Rory and the team, all throughout history.

The Hunters eventually track down Rip's team in 1871, leading to a shootout in the town of Stillwater. Despite their reputation they are relatively easily defeated. Their leader recognizes Rory as Chronos and attacks him, resulting in a fight between the two. Rory eventually stabs the man with his own blade. While the leader dies, he tells Rory that the Time Masters have initiated Omega Protocolls on every member of Rip's team and that The Pilgrim will now be coming for them. 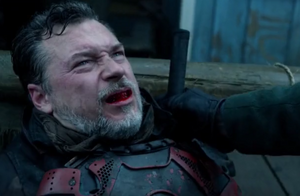 Death of the leader
Add a photo to this gallery

Retrieved from "https://villains.fandom.com/wiki/The_Hunters_(Arrowverse)?oldid=4241213"
Community content is available under CC-BY-SA unless otherwise noted.