Jules
Rico
Carlos
Many other Thugs

The Innocentz are a murderous cult gang and a group of antagonists in the controversial stealth/horror video game Manhunt. They are made up of two factions: Skullyz (Hispanic Satanists) and Babyfaces (intellectually disabled thugs and pedophiles).

The Innocentz are first seen drunk and high inside of an abandoned church in Carcer City, when Ramirez gives the orders to spread out around East Los Albos, Innocentz territory. Given Lionel Starkweather's instruction, they try and kill Cash once he enters Carcer City Mall but they all fail and then are killed by him.

Before Cash leaves the mall, Starkweather has him watch a recording of a Babyface killing one of his family members and Cash angrily throws the TV across the room, not yet knowing it was part of Starkweather's plan to eventually betray him.

After leaving the mall, Cash is told to lead The Tramp to a graveyard behind The Innocent's church where he kills the remaining Skullyz and Babyfaces in his way before finishing the mission.

After a brief mission inside of a chemical factory, The Innocentz aren't seen or heard from again.

It's unknown if James Earl Cash killed all of them or not. If any survived, it's most likely that they would be arrested by Carcer City's new police force after Cash kills Starkweather, with some members being admitted to the Darkwoods Asylum.

The bulk of The Innocentz are made up of the Skullyz who are Latino goths and gang-bangers, who are also a part of Malos and Muerte 187. They are usually seen wearing Skull masks or skull face paint, torn hoodies to look like the Grim Reaper, and several gang tattoos across their bodies. Most of if not all of The Skullyz are also drug users, some mentioning having taken Peyote and asking an unknown dark figure to lead them to Cash so they can kill him.

The Babyfaces are obese perverts and insane murderers who have put on unsettling porcelain doll masks to look like babies, as well as unbuttoned Hawaiian shirts and pajama pants seeing as they're the only clothing that fits them. One half is child-like and implied to be intellectually disabled, using insults like "Meanie" and crying to their mothers whenever they're in pain. They act incredibly disappointed whenever they spot Cash, but he manages to hide from them, telling Cash to "come out and play!". Starkweather apparently hired these men to add muscle to The Innocentz. The other half is composed of pedophiles who too use childlike terms, although in a sarcastic manner and do not appear to be intellectually disabled. They address themselves as "daddy" and often make comments alluding to child abuse and neglectful parenting. They also address Cash as "darling". 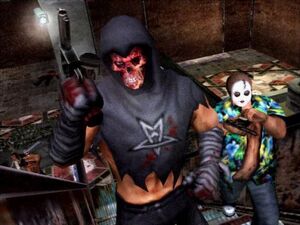 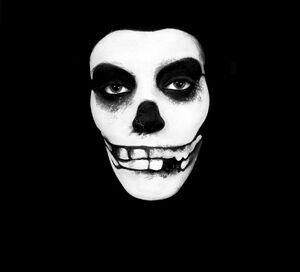 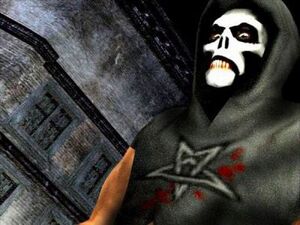 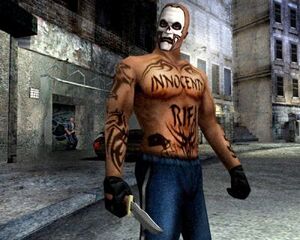 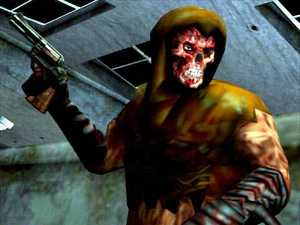 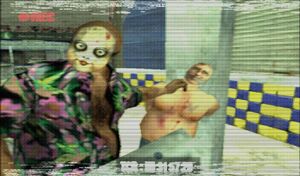 The Babyface that kills Cash's family. 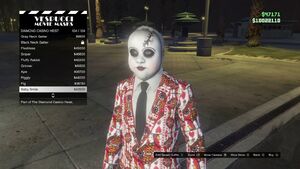 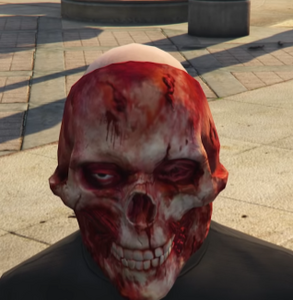