Possessor of the Akademik Vladislav Volkov

Creating an army of cyborgs.

Collecting "parts" from humans to survive.

Destroy humanity and purge the "virus" they spread.

Replace all life on Earth with machines (both failed).

The Intelligence is the main antagonist of the 1992 science-fiction horror comic book Virus by Dark Horse Comics, and its 1999 film adaptation. It is a malevolent energetic alien entity that travels to Earth to destroy humanity and purge the "virus" they spread, while also using their bodies as "spare parts" to expand itself and build an army of cyborgs.

A mysterious alien energy source in space hijacks a space station before beaming itself down to Earth at a Chinese Navy research vessel. The source reconstructs the vessel, using the various electronics to transform the crew into cyborg monsters, which it plans to unleash across the world once it reaches shore.

Later, when a salvage ship spot and board the vessel, the alien uses the cyborgs to fight against the crew. Although they are slowly killed off one by one, the salvage crew detonate an explosion that sinks the ship and destroys the alien and its cyborgs.

A large electrical energy source flies by the Earth, infecting the space station Mir. The source infects the station with a powerful electric blast, killing the cosmonauts, before using one of the antennae to beam itself down to Earth at the Russian research vessel Akademik Vladislav Volkov, which was communicating with the Mir. An electrical surge takes over the ship and attacks the crew.

A week passes when another vessel, the tugboat Sea Star, locates the Volkov following her silence. The crew, consisting of captain Robert Everton, navigator Kelly Foster, engineer Steve Baker, first mate J.W. Woods Jr., deckhand Hiko, and crewmen Squeaky and Richie Mason, climb aboard the ship to salvage any cargo. On the Volkov, most of the electronics have been destroyed and her crew is missing. Steve and Squeaky restore the power, but notice all machines still active on the ship immediately activate and function independently without human input. The security cameras also silently watch them. The anchor suddenly drops on its own and sinks the Sea Star, leaving the crew isolated on the lifeless Volkov.

Steve leaves Squeaky to guard the engine room while he goes and find the others. Squeaky spots a spider-like robot crawl down a vent, which drags him down as well when his neck gets caught in loose wires. As the others tend to Hiko's wounds, having been injured when the anchor crushed the Sea Star, they are attacked by the sole survivor of the Volkov, Nadia Vinogradova, who has gone hysterical over "it" needing power to travel and implores the group to shut down the generators. Steve, Woods, and Richie search for the engine room, coming across one of the 42 labs of the ship on the way, building more of the robotic spiders.

The three are attacked by the robots and a gun-wielding Russian, revealed to be a cyborg who the three bring down and take his seemingly dead body to the bridge. It breaks free to reveal an endoskeleton made of the skull and spine, but is shot by Richie. Nadia explains that the energy that beamed down scanned the ship's computers for information on killing people, then used the workshops to convert the crew into hostile cyborgs. The crew decide to head for the computer room, coming across Squeaky, only to discover that he has been converted by the Intelligence. A second robot, the Goliath Machine, shows up and kills Woods, causing the survivors to barricade themselves in the communication room. Richie uses the computers to ask the Intelligence what it is; it tells him that it is aware and sees mankind as a "virus" which it plans to use as "spare parts". This drives Richie paranoid, gunning down Squeaky when he breaks in and runs off, leading the others to chase after him.

Meanwhile, Everton was stripped from his command after destroying the radio since he was unwilling to abort his salvage, so he announces himself as the "dominant lifeform" to the Intelligence, and offers to help the entity navigate to its destination in exchange for disposing his crew. Discovering the ship is moving, the crew return to the bridge from outside, losing Hiko to the typhoon. Foster identifies Lord Howe Island as the ship's destination, with Nadia assuming that the Intelligence plans to seize a British military station located on the island and control the world's military forces. Goliath ambushes them but they manage to escape it. As they plan a way to sink the Volkov, a converted Everton attacks them, which they defeat by planting a grenade in-between his wired body. As the group find Richie and spill flammable fluid in the ship's bilge, Goliath, now twice in size from before, shows up again and attacks them, knocking out Foster.

Foster is tortured by Goliath for the whereabouts of the crew's detonator, though the others are able to save her. Richie is killed, while Nadia and Foster are separated from Steve. As they are cornered in front of a sealed door, Goliath obtains the crew's detonator and crushes it, sarcastically declaring checkmate. It grabs Nadia and demands if there are any more detonators on the ship, but Nadia responds that there was just one and shoots a flare gun at nearby gas tanks to destroy the robot. However, her sacrifice was in vain as Goliath withstood the blast. Steve and Foster manage to avoid Goliath and escape from the Volkov by using Richie's ejection seat. The mechanism also activates a group of grenades, triggering an explosion that sinks the Volkov. The energy substance disperses in the seawater, ending the Intelligence for good.

While the personality of the Intelligence back in its electric form is uncertain, it is sapient enough to locate the Earth and hijack a space station to beam itself down. It despises humans for it thinks them to be incomprehensible to its hive-mind. Through scanning the Volkov computers, the Intelligence becomes intelligent enough to learn about humanity and seeks to kill them so it can use their parts to expand both its hive mind and knowledge. When the crew become aware of its motive, the Intelligence becomes overly paranoid and uses the Goliath Machine, its strongest form of power, to stop them in any way possible. It even manipulates Everton to know their weakness before converting him into a cyborg under its control. 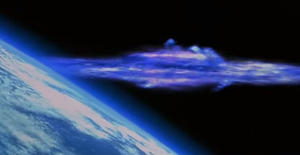 The Intelligence's base form, a scatter of electric energy particles.

The Intelligence as the Goliath Machine. 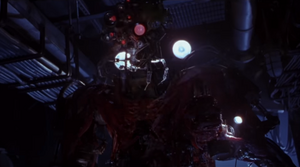 The Intelligence seconds from pounding its fist straight through Woods.

The Intelligence with Everton.

The Intelligence motherboard asking Everton to help it survive.

The Goliath Machine bursting through the doors.

The Intelligence chasing after Foster.

The Intelligence torturing Foster on where she hid the detonator.

The Intelligence seizing and crushing the crew's detonator.

The Intelligence chasing after the survivors.

The Intelligence lunging at Foster and Steve, but misses.

The Intelligence staring evilly at the crew's alternative explosive device.

The destruction of the Volkov, which also destroys the Intelligence.
Add a photo to this gallery 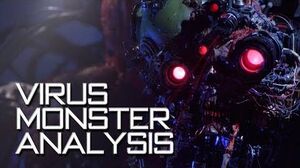 Retrieved from "https://villains.fandom.com/wiki/The_Intelligence?oldid=4144389"
Community content is available under CC-BY-SA unless otherwise noted.