Parody
The Invisible Man is a character from the novel of the same name by H.G. Wells. He was featured in the Teen Titans Go! episode, "Books".

In "Books", Beast Boy read H.G. Wells' book, The Invisible Man, and enjoyed it. However, once he was done with the book, he got bored and looked for another book to read. He uncovered Raven's Necronomicon and read a spell from the book, which brought The Invisible Man to life. The Invisible Man was evil and fought with Beast Boy. This same thing happened to the other Titans (except Raven) and all of their respective books. The other livened book characters who fought alongside The Invisible Man were Benjamin Franklin, Pinocchio, and a flock of Pelicans. The Invisible Man picked up Beast Boy by the leg and slammed him against the ground a bunch of times.

Beast Boy learned from Raven that the only way to defeat The Invisible Man would be to provide a boring analysis of the book. At this time, The Invisible Man was about to give Beast Boy a wet willie. As Beast Boy desperately pushed his wet finger hand back, he yelled out a boring, detailed summary of the book he read, followed by a collection of his uninteresting opinions. This caused The Invisible Man to get sucked back into his book again.

The Invisible Man is invisible and therefore doesn't have an appearance. However, he does wear an orange fedora with a burgundy stripe, round dark blue glasses, burgundy gloves, and brown shoes, which show up on his character. When The Invisible Man was sent back to his book, a blast of magic cast an aura around him, revealing the shape of his character. He was shown to have a square head and thick arms and legs.

The Invisible Man is characterized as an insane, amoral man in the book, who is so obsessed with finding a cure for albinism, that he's willing to ruin the lives of others, including his own family just to find a cure. Since his Teen Titans Go! version is meant to be his book version bring brought to life, it can be deduced that his personality in the show doesn't differ much from his personality in the original book. 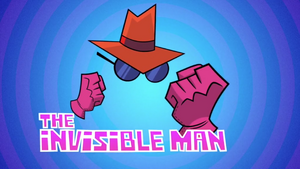 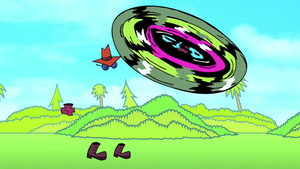 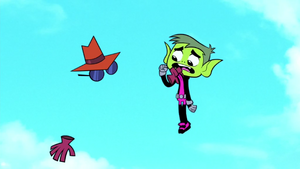 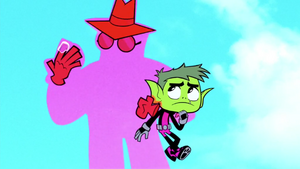 The true shape of The Invisible Man's physical form, being outlined, as he's magically zapped back into the book where he belongs. 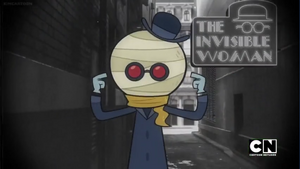