Attacking anything he sees.

Ryan Kuhn, defined by the Black Zodiac as The Jackal, is a major character and villain in the movie Thir13en Ghosts. He is the 11th ghost in the Black Zodiac, needed by collector Cyrus Kriticos to open the Ocularis Infernum and gain infinite power.

He was portrayed by Shayne Wyler.

Ryan was born in 1887 to a prostitute. He was born with an extremely dangerous mental disease that made him have a lust for murder, rape and women. Wanting a cure, he was sent to Borehamwood Asylum to be treated, but after horribly attacking a nurse, he was locked away in a padded room, bound to a straitjacket.

After many desperate attempts to escape, which cost him his fingernails, Ryan was permanently bound to his straitjacket by the doctors, who tied it so tight that it contorted his limbs in a gruesome manner.

Still fighting, though, Kuhn ripped the jacket until the doctors finally locked his head in a metal cage and sealed him in the basement. He then grew completely insane, and hated any kind of human contact, screaming in agony and sometimes cowering whenever approached.

After a fire broke out in the asylum, everyone but Ryan escaped, in an attempt to face the flames. Needless to say, he did not survive the fire. Many years later, his ghost was captured by millionaire Cyrus Kriticos, and locked in a containment cube that was sent to the basement of Cyrus' "house" which later revealed to be the Basileus Machine.

As a ghost, Ryan is incredibly frightening. The metal cage he was locked in is still on his head, with the front bars ripped outwards. His skin is severely burned and scarred, and he has long, black hair. His straitjacket is completely ripped and wasted and his hands are horribly hurt, especially in his fingers. He is well known by fans as the most aggressive ghost of the group and also the most recurring ghost in the movie.

He is the most frequent ghost in the movie, first seen attacking Kathy, ripping her clothing to shreds. Then, he tries to attack Arthur, slashing his back violently, leaving them for the Pilgrimess to finish them, but they escape as she gets locked behind them. His final appearance is during the climax, when he was the first ghost among his fellow captured specters to lift Cyrus, and carry him to his death in the Ocularis Infernum's blades. He is also the first to leave the machine and cross over. 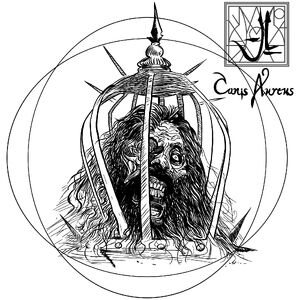 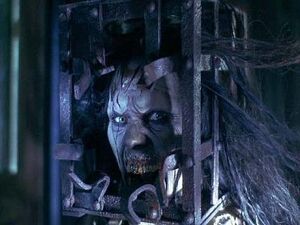 Retrieved from "https://villains.fandom.com/wiki/The_Jackal_(Thir13en_Ghosts)?oldid=3527951"
Community content is available under CC-BY-SA unless otherwise noted.