Bring patriotic glory back to America by toppling the Russo-American coalition (succeeded to an extent).

They are a mysterious pair of men who are prominent members of an Ultranationalist terrorist organization known as 50 Blessings, who seek to bring the United States of America back from its former glory by coercing citizens to murder prominent Russian figures by the dozen. Disguised as janitors, they are in charge of the phone call operations in Miami and thus, are the ones responsible for the events of the first game and virtually all subsequent events involving masked spree killers.

The Janitors come off as a pair of snide and arrogant men who are shown to display little to no value towards the people they threaten into doing 50 Blessings' bidding. Even when they say their "goodbyes" to Richter, they are shown to feign a polite demeanor that comes off as disingenuous, further evidenced by the Janitors potentially trying to get Richter killed in a prison riot and do not hesitate to repeatedly insult Biker in the face of death if Biker did not crack the password on their computer. In reality, the Janitors are highly intelligent xenophobes who single-handedly orchestrated the events of the first game, which lead to irreparable consequences throughout the series. They were capable of hiding many forms of evidence that could trace back to them, including framing the source of their phone calls on the Golden Truckstop, which manipulated Jacket into personally destroying what was left of the Russian Mafia in 1989.

The Janitors are additionally highly ruthless and manipulative jingoists that are not above sending death threats to those who do not comply with them and will further invade their victims' privacy by vandalizing their property. As typical members of 50 Blessings, they are also extremely prejudiced towards Russians and are very capable of having many of them killed to further their own agenda, which they staunchly believe in. The Janitors believe that America is a country at war and those who sign up for 50 Blessings are willing to give up their lives in favor for their cause to try to justify their death threats. They also believe that threatening people into getting what they want is a staple to American society, further showing their hypocrisy in their methods. 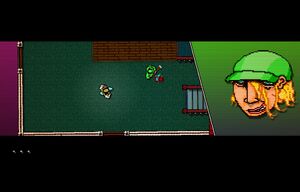 Dennis watches Jacket leave his apartment before his hit on Hotel Blue. 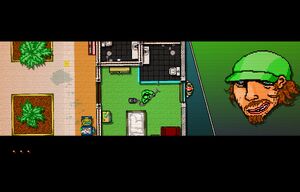 Jonatan spying on Jacket while he attacks Hotel Blue. 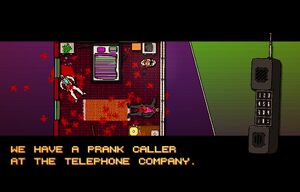 The Janitors order Jacket to kill Biker at PhoneHom's headquarters. 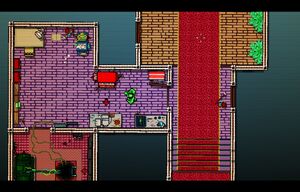 Dennis runs away after being spotted by Biker. 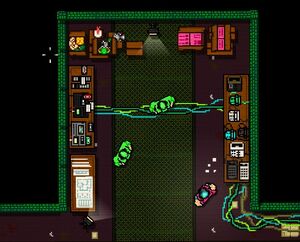 Biker confronting the Janitors in their base of operations. 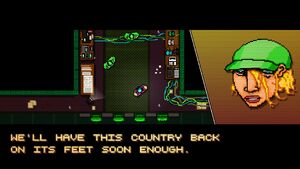 The Janitors being interrogated by Biker. 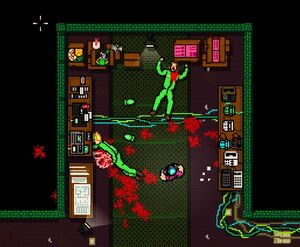 The Janitors are killed by Biker (determined by the player's choice). 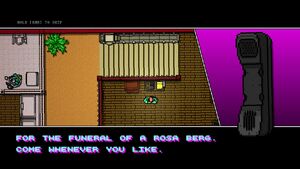 The Janitors threaten to kill Richter's mother for disobedience. 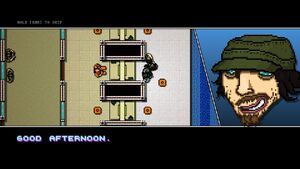 The Janitors greet Richter in prison. 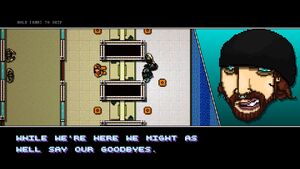 The Janitors say their "goodbyes" to Richter.