Around the 21st century.

The Jokerz are a recurring villainous group in Batman Beyond. They are a large street gang 40 years in the future of Gotham City that take their inspiration from Joker, the original Batman's onetime arch-nemesis. They tend to dress in clownish costumes and makeup as did their namesake, but have none of the style or humor of the original.

While the original Clown Prince of Crime might have long since disappeared from Gotham, he left such an impression on the psyche of Gotham's criminal underworld that his spirit has lived on inside these copycat hellions. Dressed in clown outfits and face paint, they especially enjoyed practical jokes that turned deadly and generally creating chaos.

At least one of the Jokerz was observed engaging in vandalism and then attempting to extort money from anyone who he believed was amused by his antics. While the Jokerz were certainly a menace, their crimes were small and they were much more easily thwarted than their criminally insane, diabolically creative and resourceful namesake.

In the animated series Batman Beyond, Batman battled different versions of the gang on several occasions. In a Justice League Unlimited episode, Ghoul stated that there are 9,453 active Jokerz that are divided into approximately 200 separate groups (It's unlikely that Chronos affected the large amount considering that he only hired one gang of the Jokerz). There are three known such versions. The first is led by a vandal dressed as the Joker. Those were the Jokerz that Derek Powers' henchman Mr. Fixx incriminated for the murder of Terry McGinnis' father in "Rebirth", the two-part pilot of the animated series. Their leader is J-Man, who dresses in a style similar to the Joker and voiced by DCAU creator Bruce Timm.

In the episode "The Winning Edge" members of this gang buy weapons from a dealer on the streets but are stopped by Batman.

The episode "Joyride" shows their initiation. They take their new member Lee to a small cave with the Joker's skeleton but it is cut short when they find a military jet. They use it to destroy the headquaters of a rival gang The T's but Batman destroys it in the end.

A second group of Jokerz appeared in the episode "Hidden Agenda", led by a Jokerz member named Terminal, a top-tier student at Hamilton Hill High and a would-be killer of rival candidate for valedictorian Max Gibson. Max's search to determine who is after her leads her to find out Terry's secret life as Batman.

In "Once Burned", The Jokerz Territory were seen by the sewers (although it has been briefly seen in other episodes), which is home to dozens of Jokerz from various gangs.

In the episode "Countdown" several Jokerz mug Ro but are scared off by Batman, later they try to rob Zeta in the form of an average man but they underestimated his great strength and are all taken out.

In the direct-to-video feature Batman Beyond: Return of the Joker, a third group, including Harley Quinn's twin granddaughters, was actually led by the revived Joker himself, who was using Tim Drake's body. This third group was defeated, and the host seemingly freed from the Joker's influence.

The Jokerz are later featured in the show Static Shock , specifically in the episode "Future Shock" where a gang of them try to trap Terry/Batman II and a time-displaced Static but together they defeat them all.

The last appearance of the Jokerz was in the Justice League Unlimited episode "The Once and Future Thing, Part 2." In this episode, the same group of Jokerz from Return of the Joker are shown to be working for a time-traveling villain called David Clinton, known in the comics as the Atom's archnemesis, Chronos. This team of Jokerz has been enhanced with super-powers and/or cybernetic enhancements that Clinton pulled from the future. This group of Jokerz has killed most of the Justice League of that time, leaving only Static, Warhawk, that timeline's Batman, and an elderly Bruce Wayne. The present-day Batman, Green Lantern (John Stewart) and Wonder Woman chase Clinton to this future, and were able stop Clinton and undo the damage he did to the timestream, erasing all of the events of the episode. They were possibly returned to their normal selves. Considering the fact that Bonk, who was seemingly murdered by the Joker in Return of the Joker, is part of the group, it most likely indicates that the Uncut version of that film is more canon than the Cut version.

A large well-known group of Jokerz led by J-Man, who dresses very similarly to the original Clown Prince of Crime, but they would always get beaten and stopped by Batman. The other members of this band include:

Carter Wilson adopted the identity of "Terminal" and made himself the undisputed leader of a small group of Jokerz. They engaged in the usual terrorizing of random victims, with occasional asides to Carter's personal agenda. After a failed attempt to kill Maxine Gibson, the entire gang was subdued by Batman and arrested. The other members of this band include:

The third band of Jokerz was introduced in Batman Beyond: Return of the Joker, where they worked for what appeared to be the original Joker. They later appeared in an episode of Justice League Unlimited, now working for Chronos and enhanced with super powers. When Chronos is defeated, this timeline is erased. 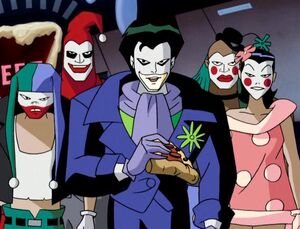 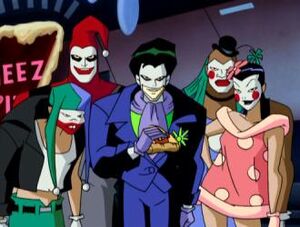 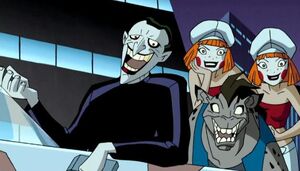 The Joker, the Dee Dee Twins, and Woof. 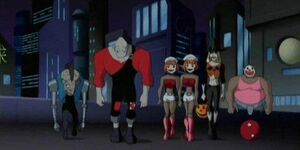 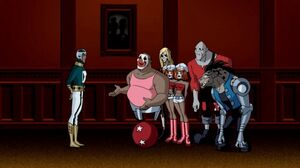 The Jokerz with their new boss Chronos. 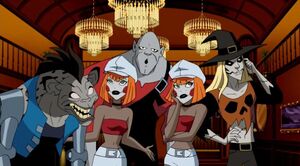 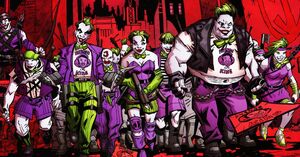 The Jokerz gang in the Batman Beyond comic book series. 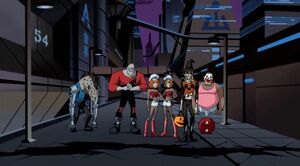