NOTE: This article is about the ghost featured in Thir13en Ghosts. For the X-Men villain, see Juggernaut.

Horace "Breaker" Mahoney, chosen to be The Juggernaut by Cyrus Kriticos, is a major villain and character in Thir13en Ghosts.

He was portrayed by John DeSantis (credited as John De Santis).

Horace was born completely deformed, standing seven feet tall in his adulthood, and standing as an outcast throughout all his life, being ostracized from nearly everyone. His mother abandoned him in his birth, and his father forced him to work on a junkyard, crushing cars with his unusual strength. After his father died, Horace was left alone, and soon went insane. His first victims were two female hitchhikers that he took to his junkyard and tore them apart with his bare hands, feeding their remains to his dogs. After several more kills, he then caught an undercover female police officer, and she called for backup, a SWAT team surrounding the junkyard moments later. During Horace's arrest, he broke free of his handcuffs and killed three police officers, causing the SWAT team to open fire at the giant. After he hit the ground, another clip was fired on his already lifeless body, just to be sure.

Horace's ghost is horribly disfigured, ridden with bullet wounds all over him. His clothes are ragged and torn apart, stained with his victims' blood.

The Juggernaut is the first ghost seen in the movie, when Cyrus' team of ghost hunters including psychic Dennis Rafkin and his brother Joshua come to his junkyard to capture him. They succeed, but Joshua is killed in the process, and so is Cyrus (apparently).

Horace is not seen again until near the end, when he attacks Dennis Rafkin who hid Arthur Kriticos in the Basileus Machine's basement, breaking Dennis in half.

He is later freed from Cyrus' trance, and and joins in with some of his fellow 10 angry spirits in lifting the millionaire to his death in the Ocularis Infernum's blades. He is finally seen leaving the house with the other ghosts and crossing over. 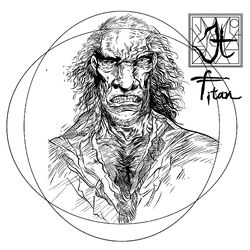 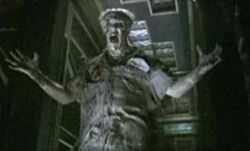 Horace "Breaker" Mahoney aka The Juggernaut.
Add a photo to this gallery

Retrieved from "https://villains.fandom.com/wiki/The_Juggernaut?oldid=3047185"
Community content is available under CC-BY-SA unless otherwise noted.