The K-Pop Gang are the secondary antagonists in DreamWorks' 38th full-length animated feature film Trolls: World Tour. They are a group of female trolls who are primarily centered around K-Pop and were also bounty hunters employed by Queen Barb.

They are voiced by the K-Pop band Red Velvet.

The K-Pop Gang are five multicolored Trolls with chrome skin, swept down hair on their left faces, eye makeup, and latex body suits.

Despite being bounty hunters, they're playful who like to toy with their target before grabbing them as shown when they kidnapped Branch. They would then move quickly and surround their victim before going in for the capture. They're not greedy, considering to split the capture of Branch with Tresillo and his Reggaeton Trolls after the two groups come to a mutual respect of each other.

The gang first appeared after Queen Barb summoned the K-Pop Gang, along with other Bounty Hunters; all of them were given the objective to track down and capture Queen Poppy, along with the Pop String if given chance.

However, the K-Pop Gang finds Branch instead and captures him, demanding they be lead to Poppy by him. This is interrupted by the Reggaeton Trolls Tresillo, Marimba, and Tambora, who want Branch for themselves to save their own music, and both sides eventually prompted to hold a dance-off. Despite trying to get Branch for themselves, the K-Pop Gang see the Reggaetron Trolls' good talent and agree to split Branch, until he convinces both of them to help save Poppy and all music; the two groups accepted his plan and later go with him to Barb's victory Rock concert.

When the Strings are destroyed, the K-Pop Gang too lost their music. But soon the Trolls all regained their music thanks to the Trolls realizing they no longer needed them and the music they love comes now from within. 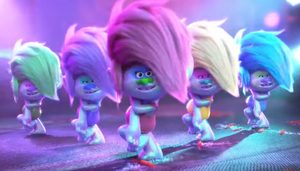 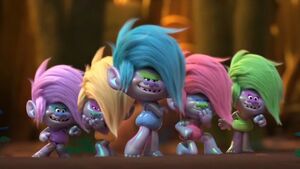 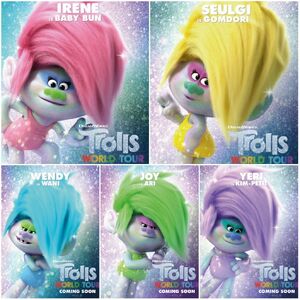