The Key is a villain in the DC universe and an enemy towards The Justice League.

The Key used to be a chemist in Intergang. A chemical turns him into a psychopath and activates ten senses. He creates master criminal plans and gets an obsession with keys. He uses a key gun and his henchmen are called Keymen. He becomes a recurring a enemy of the Justice League. The chemicals later get to him which send him into a coma. After he got out he put the league in a big illusion trap but failed. When he is defeated he is usually sent to Arkham Asylum.

In this version The Key is the leader of a criminal organization that fights the Justice Society of America. He has many members worldwide. While he was trying to escape the JSA on a Cable Car he jumps off of it to his death on order to escape custody.

In the show Justice League Unlimited The Key appears in the episode "I am Legion". He is a member of the Legion of Doom and saves Lex Luthor from the police. Gorilla Grodd send him, Luthor, and Doctor Polaris on a mission to a deserted island where the military used to keep weapons. While Luthor does his job he and Polaris fight some members of the Justice League. In the end the escape. In the episode "Dead Reckoning" he is seen with other members of the Legion. The Key was originally going to play a major in the season final where he would be connected to Brainiac in some way which explains his prominence in the beginning, him being on good terms with Luthor, and having the same voice actor as Brainiac. However this was dropped in favor of Darkseid. In the episode "Alive he sided against Luthor in the mutiny and was frozen by Killer Frost.

In this show, he was voiced by Corey Burton.

This version of The Key appears in the episode "Animal" where he is able to download an important security file into his own mind which is worth a fortune. However, he soon arrested by Batman and Katana and is taken to Blackgate Prison. Batman however thinks that he should be taken to a more secure prison and he gets himself arrested to get close to him. While Key is in Blackgate the prison kingpin Killer Croc sets his sights on him (because of the data in his mind) and has his men stage a riot so he can get his hands on him. However, Batman intervenes and he and Croc fight. Key watches in horror as Batman brutally beats Croc which scares Key enough to go with Batman. Once the police take down the riot Key is taken to a more secure prison.

In this show, he was voiced by J.B. Blanc. 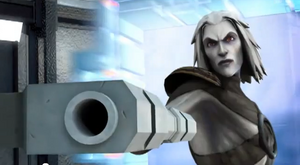 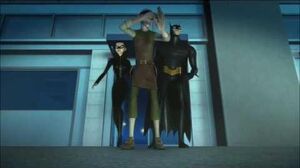 Retrieved from "https://villains.fandom.com/wiki/The_Key?oldid=3328691"
Community content is available under CC-BY-SA unless otherwise noted.