Villainous Feline
The Kitty is the arch-nemesis of The Ace Savvy and One-Eyed-Jack TV Show and the main antagonist of The Loud House Season 4 episode, Kings of The Con.

While Lincoln and Clyde were about to attend the audition for The Ace Savvy Movie at The Convention Center, They almost tried everything to get a part in the movie but sadly they didn't unfortunately. but Lincoln decided that they should fight crime in order to get a part in the movie and that is by defeating The Kitty. meanwhile Clyde uses a trap to lure Kitty into and The Kitty Hisses and Scratches Clyde while he attacks him. Lincoln and Clyde find out that The Kitty can shoot hairballs by licking his hair and he shoots the hairballs at Clyde and Lincoln while they were hiding behind The Cutboard Cutouts. then Lincoln figures out how to defeat The Kitty is by signaling his sisters and they managed to stop The Kitty in his tracks. after Lincoln and The Gang trapped Kitty in his crate, The Judges came and heard the noise coming from backstage but they were impressed by Lincoln and Clyde by capturing the evil-doer. after The Judges told Lincoln and Clyde that they got a role for the movie where they are The Pooper Scoopers of The Kitty, He was last seen laughing and smiling evilly.

his personality is seen as ferocious, clueless, and sneaky similar to the other Loud House Villains. 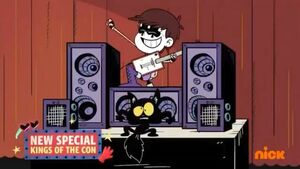 The Kitty about to be blasted by Luna's Megaphones.
Add a photo to this gallery

Retrieved from "https://villains.fandom.com/wiki/The_Kitty_(The_Loud_House)?oldid=3553790"
Community content is available under CC-BY-SA unless otherwise noted.