The Kurgan (whose real name is unknown) is the main antagonist of the 1986 film Highlander. Connor Macleod's archenemy and a prime contender for the Prize which all immortals seek, the Kurgan is a brutal and sadistic warrior driven to claim the Prize for the power over all humanity it would grant him.

He was portrayed by Clancy Brown, who also played Viking Lofgren in Bad Boys, Byron Hadley in The Shawshank Redemption, voiced Dr. Neo Cortex in the Crash Bandicoot video game franchise, Mr. Krabs in the SpongeBob SquarePants franchise, Savage Opress in the Star Wars universe, Gunmar in the Tales of Arcadia franchise, and the Evil Entity in the Scooby-Doo franchise.

In the novelization of Highlander, Kurgan's past is fleshed out in more detail. Kurgan was born with the forename Victor on October 6, 1005 BC in Russia. His first death and revival as an immortal came at 970 BC when his father, violently drunk, crushed his head with a rock. Upon resurrection, Kurgan had his revenge by forcing his father to swallow a stone seared red-hot by fire, killing him. After that, Kurgan went off to join bandits. Then one day, he encountered a man who is only known as 'The Bedouin', an immortal, like Kurgan. Bedouin revealed to Kurgan who and what he is, and took Kurgan under his tutelage and taught everything he knows, with strong belief that Kurgan would win The Prize as Bedouin saw through Kurgan's immense strength and savagery. Although Bedouin at one point might have been considered as Kurgan's only 'friend', Bedouin eventually met his end the same way other luckless mortals and immortals did when they encountered Kurgan. Ironically, Kurgan killed his mentor the way Bedouin taught him: to show no mercy in combat.

Circa 410 AD Kurgan, until his fateful encounter with Connor Macleod, lent his service to various factions notorious for their barbarity such as Vandals and Goths/Visigoths. During this time Kurgan participated in attacking the Roman Empire, ransacking Roman settlements and fighting against the Huns until subsequently allying with the Huns in the year 453 AD, fighting alongside Attila. From the 5th to 13th centuries, Kurgan fought for the Tatars, as well as with Viking raiders and the Mongol horde of Genghis Khan. All these eons of years he destroyed, burnt, pillaged and slaughtered all the while collecting countless heads of Immortals.

Fast forwarding to year 1536, The Kurgan is first encountered as a mercenary hired by Clan Fraser, a notable enemy of Clan MacLeod. The mercenary immortal agrees to fight only on the condition that the young Connor MacLeod is left unharmed until the Kurgan can reach him. As Connor is a potential immortal, Kurgan is naturally intent on absorbing the Highlander's Quickening and eliminating a potential rival for the Prize before he could become a serious threat.

However, though he mortally wounds Connor over the course of their battle, he is dragged away by MacLeod reinforcements before he can behead him, and Connor is taken off from the battlefield before the Kurgan can catch up; (the battle is lost for MacLeod clan) later that day, Connor dies of his wounds and is reborn as an immortal.

Many years later, the Kurgan reappears again, having been hunting down Connor ever since he was cast out of his village. By this time, however, Connor has been educated in the ways of the Immortals by Juan Sánchez Villa-Lobos Ramírez. Unfortunately, the Kurgan arrives at the MacLeod household while Connor is away, forcing Ramirez to fight off the brutal warrior in a desperate attempt at saving Connor's wife, Heather MacDonald. Though Ramirez manages to slice open the Kurgan's throat over the course of the battle - leaving permanent scars that not even an immortal's regenerative powers can erase - he fails to actually decapitate him, eventually resulting in the Kurgan beheading the ancient metalurgist and absorbing his Quickening. Then, in the ruins of the house, he rapes Heather; this crime remains undiscovered for centuries after Heather's death, as she was too ashamed to admit it to her husband even on her deathbed. Indeed, Connor only realizes the truth when Kurgan later brags about it (in the process he realizes that Heather was actually Connor's woman, not Ramirez's as the brute had previously thought) during one of their later encounters in the 20th century.

After many conquests and many massacres, Kurgan makes his way to America in 1985, drawn by the Gathering - the climax of the Immortals' struggle and the prelude to the final battle for the Prize. Now going by the name of "Victor Kruger", he seeks out the last surviving immortals, by this time consisting of Connor, Sunda Kastagir, Iman Fasil, Osta Vasilek, and Yung Dol Kim: after eliminating Vasilek in New Jersey and Kim in Manhattan, the report of Fasil's death by Connor in Madison Square Garden eventually brings him back into contact with Connor - though the interference of a police helicopter forces them to retreat before the two could finish their fight.

After killing Connor's immortal friend Kastagir, the contest is reduced to a straightforward battle to the death between Connor and the Kurgan. However, the Kurgan has been seen over the course of the duel with Kastagir, and is now wanted by the police in connection with the spate of decapitations occurring across New York: in an attempt to disguise himself, the Kurgan shaves his head (though Connor still noticed him on sight) - and in a further attempt to draw the world-weary Connor out of hiding, kidnaps his girlfriend, Brenda Wyatt. For good measure, he takes her on a joyride through the city en route to the Silvercup Studios building while driving down the wrong side of the street, playing chicken with cars and running over pedestrians while gleefully singing the theme from "New York, New York."

Connor follows them to the building, where he and the Kurgan face each other for the last time: after an extended battle on the rooftop, the two of them tumble through a skylight and do battle inside the building itself. Even though the Kurgan is able to disarm Connor, his failure to subdue Brenda gives her an opportunity to attack him with a pipe, allowing Connor enough time to recover and go on the offensive. In the end, Connor's skill and calm win out over the Kurgan's brutality, and Connor successfully decapitates his foe in a final lunge - his essence passing to the Highlander, winner of "The Prize."

After Kurgan's death, blames for Immortals' deaths by beheadings occurred in and out of N.Y had been placed solely on him.

While never making an appearance on the TV show, the Kurgan was mentioned at least once, by Joe Dawson, saying flatly to Duncan MacLeod that Connor had done the world a favor by taking his life. Since Immortals existed past 1985 on the TV series, the final battle between Connor and the Kurgan is no longer the last battle leading to the Prize. It is still however, held as an impressive victory that kept a monster from being the last Immortal. Later stories set in this continuity indicated that Connor was forced to struggle with having the Kurgan's essence inside him.

The fates of neither the Kurgan nor Connor were ever brought up in a grim alternate universe Duncan visited during the TV series' finale.

Cruel, ruthless, megalomaniacal, brutal and entirely without remorse, the Kurgan was a relentless killer who gloried in destruction and murder, taking particular delight in killing and terrorizing innocent people. He clearly has a twisted sense of humor, amusing himself by taunting nuns and other members of the clergy simply for the sake of watching them jump in fear. As nothing short of decapitation can kill him, the Kurgan regularly behaves in as reckless and demented as possible, enjoying both the thrill of danger and the thrill of endangering others - particularly during his game of Chicken on the wrong side of the road, during which he takes great delight in making Brenda scream until she passes out.

More than anything else, however, the Kurgan enjoys antagonizing Connor MacLeod, particularly once the two of them become the last surviving immortals. Having already murdered two of Connor's closest friends, he clearly enjoys intruding on the Highlander's private time in church (especially given that Connor is praying for Heather and Ramirez) and behaving in as annoying a manner as possible. Then, after bragging about raping Heather, he finally realizes that the woman he raped so many centuries ago was actually Connor's wife and not Ramirez's; immediately, the Kurgan rubs the knowledge in Connor's face, claiming that Heather never told him of the rape because she secretly enjoyed it, secure in the knowledge that Connor will never break the rule of fighting on Holy Ground, no matter how angry he may be.

While it was never really known what Kurgan would have done with The Prize had he achieved it, with all his savage personality it is not too hard to speculate. That said it has been speculated in-universe he may use it to rule the world as an all-powerful god as they feared he’d bring an eternity of darkness upon humanity. 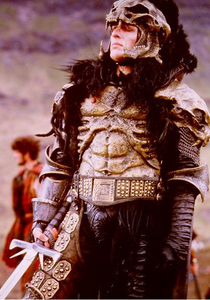 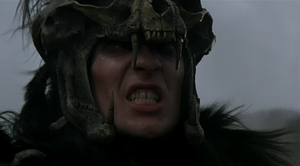 The Kurgan facing Connor MacLeod on the battlefield. 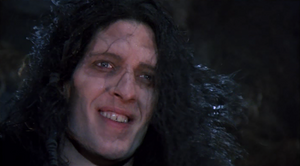 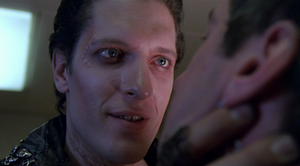 The Kurgan terrorizing the motel's manager. 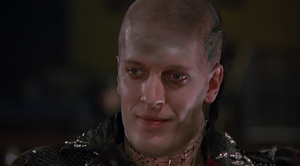 The Kurgan speaking with MacLeod in a church and the Kurgan's evil grin. 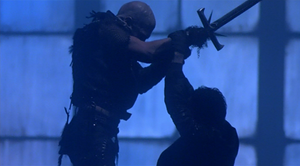 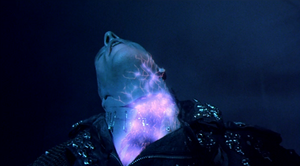 The Kurgan decapitated by MacLeod.
Add a photo to this gallery

Retrieved from "https://villains.fandom.com/wiki/The_Kurgan?oldid=4219120"
Community content is available under CC-BY-SA unless otherwise noted.