Ruler of the Maw

Reading from her library of books

Maintaining her appearance
Looking at herself in the mirror

Remain in control over the Maw

Defeat the Runaway Kid (both succeeded).
Defeat Six (failed).
Turn any child that sees her face into a gnome (succeeded, untll her death).

The Lady, also referred to as the The Governess in the game's files, is the main antagonist of the 2017 indie horror video game Little Nightmares and its DLC campaign Little Nightmares: Secrets of the Maw. She's a powerful being that watches over The Maw, known to be "it's heart". She spends most of her time in her quarters, and she has little patience for unwanted visitors who disrupt her privacy. If she catches said trespasser, she will use her powers to turn them into a Nome.

The Lady is the leader of The Maw, a giant submarine-like ship that prepares large amounts of food for The Guests to feast upon. When asked by fans if she was a prisoner there, the creators responded that "she belongs there". Like The Thin Man, she is less grotesque than the other humanoids in the game and possessed an immense amount of power. There are a handful of things implied about the Lady. For starters, she has the ability to consume souls, and it is hinted at that she eats the souls of the Guests as they are "never heard from again" after boarding the Maw. After Six absorbed her powers, she gained this abilities as well.

In the prequel, the main antagonist (Mono) was in some way connected to The Thin Man, possessing the same powers as him and absorbing the man himself leading to his demise. Later, at the end of the game, Six betrayed him and left him alone in the Signal Tower to sit in a chair for years and slowly turn into The Thin Man, or at least a character that looks like him. This implies that the man's existence is a never ending cycle where Mono is destined to become the Thin Man. It is also heavily implied that Six is The Lady, for a number of reasons. For starters, she ends up taking the Lady's powers, and is never truly seen "leaving" the Maw at the end of the game. In addition, a portrait of The Lady can be found standing with someone that looks like Six, and a character in a yellow raincoat can be found in the The Twin Chefs' quarters.

One of the Lady's key characteristics is her insecurity. In the final DLC of the game, we find that when looking in a mirror she has a very deformed face which causes her to emit distressed noises. Being spotted causes her to chase after the child and turn them into a gnome. Ninety percent of the mirrors found in her quarters are cracked or shattered. In fact, she is seen doing her hair in a broken mirror. She is defeated when Six uses a functioning mirror to shine in her face, which weakens her to a point where she is able to eat the Lady's powers.

The Lady has been eluted to having many different connections to many different characters. Her quarters are littered with tone of paintings of many different people that have both appeared in the game and that have not. Characters that have been seen include The Granny, The Ferryman, The Teacher, The Doctor, The Bullies, her employees, and even some characters that have been given titles but have not yet been seen in the game. In the comic series, The Ferryman and the Lady's relationship are illustrated on multiple occasions, having himself appear in one of her mask's eyeholes. The Ferryman's duty is to bring children from around the world to the Maw to be made into meals, so this may just be an employment relationship.

The Lady's past is vastly unknown, but some of her habits and decor make hints at it. In the DLC, we see that she has a doll collection, and she takes the time to cradle them and treat them like babies. When participating in certain activities, she will murmur a song under her breath with so happens to also be the game's main theme. Her quarters are also filled with vast amounts of books for her to read, but no televisions (further emphasizing her possible discourse with The Thin Man). Also for some odd reason, her quarters are filled with naked mannequins that are about the same size as her, but they don't seem to be used for clothing.

When hearing that there is an intruder in her presence, her first instinct will depend on the intruder's proximity to her. If she is able to see them by turning around, then she will kill them on the spot using her powers. If not, she she will dip into the shadows and escape to another part of her living space. After doing so she will stock the character, moving from one corner to the other, hiding herself among the many mannequins. She never attacks them physically, rather uses her abilities to turn them into gnomes.

In Issue 1, The Lady makes a cameo appearance walking down a hallway and then taking off her mask. In her right eye appears a boat which holds The Ferryman and Six. The text on the panel reads "what is she hiding? What has she seen?".

She makes a cameo appearance in the second issue in the very last panel as the text reads, "who knows what will look back". This is because her back is turned to Six as she enters her room.

Like most of the game's characters and events, the Lady's role and biography is a mystery. She is the owner of The Maw, the ship in which the game takes place. At the begin of the game, the Lady is seen glaring at the protagonist but is then not encountered again until the last part of the game. However, several mysterious shrines that can be found throughout the Maw in her honor.

Eventually, the Lady is too weakened from the mirror and falls to the floor in pain. While she lies on the floor twitching, Six is overcome by her hunger once more and slowly approaches her fallen enemy. Six then proceeds to sink her teeth into the Lady's neck, killing her and feasting on her flesh. After the Lady's death, Six is consumed by the dark energy used by the Lady. With the Lady's powers, Six proceeds to coldy slaughter all The Lady's customers and guests on the ship, taking their life energy and absorbing it, in an act of hatred and revenge for the torture she has been put through. She then leaves the Maw, leaving all the corpses behind.

Little Nightmares: Secrets of the Maw

At the very end of the "The Hideaway" chapter, the Runaway Child escapes onto the top of an elevator that she happens to be riding. The camera slowly pans down to reveal her being facing the wall, and then it fades to black.

In the "The Residence" chapter, the Runaway Child explores the Lady's residence. She is first seen nurturing a baby doll in her hands in front of a mirror. The child must sneak by her or she will catch him.

She is not seen for a while after this until the child enters a hallway filled with rooms with drapes for doors. Eventually, he reaches a room where the lady is staring at herself in the mirror. The mirror reveals her to have a grotesque troll-like face. She quickly notices the child, screams, and then disappears. As the child runs from her in the halls, she will hide among mannequins that resemble her and at the end of hallways. Rather than catching him, she just seems to stalk him until he reaches a room where she lifts him off of the floor with her powers. She slowly emerges from a dark doorway and continues to hold him in her powers, making his body disfigured until the scene fades to black. When it fades back in, she is gone and the child is now a Gnome.

The Lady is arguably the most powerful enemy that Six faced in the game. In addition to her authority over the Maw, she possesses following abilities:

Despite her immense powers, the Lady has a few weaknesses. Her dark magic seems to have corrupted her soul: despite having a beautiful physical face, her reflection is grotesque. To avoid seeing her face reflected, she wears a mask and breaks her mirrors out of disgust. She also cannot withstand strong light reflected by the special mirror that Six used against her - repeated exposure severely weakened her and eventually brought her to her knees. 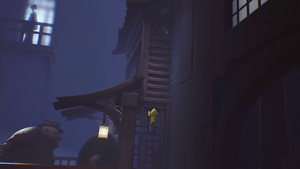 The Lady watching her customers arrive. 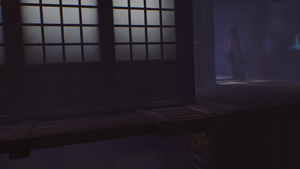 The Lady entering her elevator. 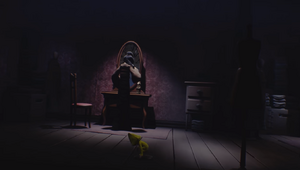 Six sneaking past the Lady. 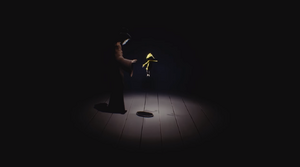 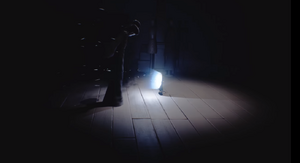 Six fending off the Lady. 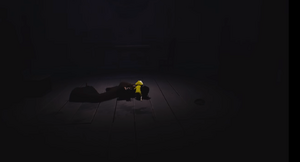 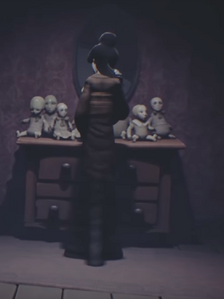 The Lady cuddling a doll. 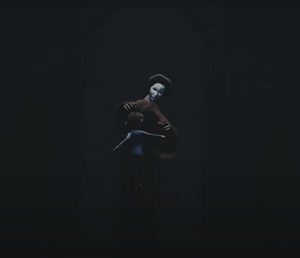 The Lady disfiguring the boy. 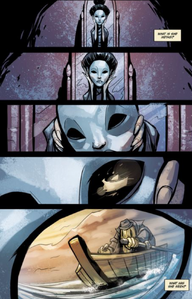 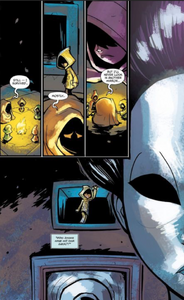 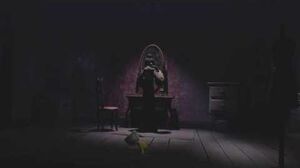 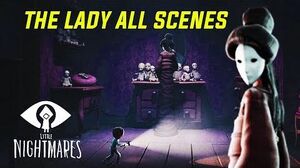 The Lady All Scenes - Little Nightmares The Residence DLC 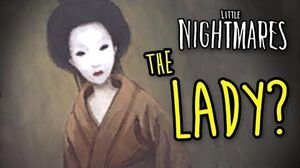 WHO IS THE LADY? - Little Nightmares The Residence EXPLAINED! Story Theory 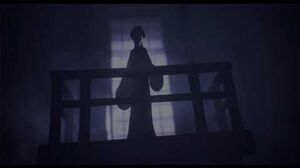