Trying to eliminate the Hulk.

Defeat the Hulk and the Avengers.

The Leader (real name: Samuel Sterns) is an evil mastermind and the main antagonist of the Incredible Hulk comic book series, a franchise produced by Marvel Comics, and has appeared in other media as innumerable cartoons, movies, and video games.

The Leader is considered one of the main archenemies of the Hulk (sharing the position with Abomination and General Ross), and is by far the smartest of Hulk's recurring opponents and in many ways is a reverse of the Hulk, while the Hulk seems to have limitless strength and rage so to the Leader seems to have limitless knowledge and calm, albeit his calm is often broken into megalomaniacal laughter and other classic villainous behavior.

The Leader was once an ordinary human (like most of Hulk's foes) but was exposed to similar gamma-radiation as the Hulk and mutated into a grotesque green-skinned monster whose cranium was extremely swollen - probably due to his brain becoming so hyper-energized.

Ever since laying eyes on the Hulk the Leader became somewhat fixated on him, the two fought many battles and the Leader was prone to hiring notable opponents of the Hulk such as the Chameleon, Arsenal and the Rhino (who is actually more associated with Spider-Man) - in the comics he almost always remains a mad schemer and tends to fight the Hulk via minions, pawns or complex machines since he is physically weak.

In the cartoons however the Leader tended to create altered clones of the Hulk from samples of blood he had collected, in doing this he had an army at his disposal capable of tackling the Hulk - many of these clones were enhanced with cybernetics but were generally much weaker than Hulk or even She-Hulk - though the Ogress was fairly powerful, if lacking in intelligence.

In the sequel to the film, the Leader serves as the main antagonist.

The Leader appeared in his pre-mutated form as Samuel Sterns in the 2008 film The Incredible Hulk, portrayed by Tim Blake Nelson. He is not seen until near the end of the movie and plays no part as a villain, but a supporting character. In this film, he is a university professor trying to help Bruce Banner find a cure for his transformations into Hulk, while operating under the alias of "Mr. Blue", when Banner's alias was "Mr. Green".

Upon meeting Banner and Betty Ross in person, Sterns explains that he has made a finalized suppressant that can seemingly cure Banner of his mutation. Though the operation was a success, Sterns also confesses that he synthesized Banner's blood sample to provide cures for all diseases. A horrified Banner attempts to convince Sterns to destroy the work, warning that Betty's father General Ross and his unit are intending to weaponize it for their own needs, but Emil Blonsky arrives to the scene and beats up Banner before taking him into custody, much to both Betty and Sterns' horror.

As Banner and Betty are taken away into custody, Sterns explains his actions to Major Kathleen Sparr, stating that he only wanted to help find a cure for Banner's mutation. Though Sparr is about to accept Sterns' explanation, she ends up being killed by Blonsky, who forces Sterns to inject him with Banner's blood, as he covets the Hulk's power. Sterns warn that the combination of the super-soldier formula and Banner's blood may cause him to become an "abomination". Unconcerned, Blonsky intimidates Sterns to administer the blood and a gamma charge. The experiment mutates Blonsky into Abomination, who then attacks Sterns by tossing him onto a nearby chair that held a canister of Hulk's blood. This causes a cut on his forehead and the canister itself to leak with a few drops of Banner's blood into the wound, causing Sterns' cranium to rapidly expand, to which he grins maniacally.

After Abomination's defeat, Black Widow found Sterns whom the mutation has gone wild with his brain power incremented exponentially. They both had a brief conversation, during which Sterns identified Black Widow's birthplace from a hint of accent in her voice. Sterns then attempted to bribe her, promising he would help her come back to Stalingrad, but Widow shot him in the leg and arrested him.

From that point, Stern was under S.H.I.E.L.D.'s custody and is referred to as Project Mr. Blue where he was examined to see how worse his mutation has altered his physiology.

The creators of the movie have stated that if another movie is made they plan on having the Leader as a more prominent character, perhaps even the main antagonist. When he does eventually appear as The Leader, he would likely start off his life as a villain from escaping S.H.I.E.L.D.'s custody given to his arrest by Black Widow.

The Leader appears as the main antagonist of the TV series Hulk and the Agents of S.M.A.S.H., voiced by James Arnold Taylor, who also voiced Osi Sobeck and Rako Hardeen in Star Wars: The Clone Wars, Eddie in Jurassic World: Camp Cretaceous, The Beekeeper in Johnny Test, and Prince Charming in the video game adaptations of the Shrek films.

His main priority is to cause some kind of world-changing horror that will make all mankind fearful, so they don't disapprove of the Leader appearing to live up to his namesake, having even made deals to share world domination with other villains in the series. 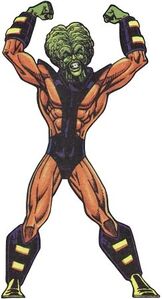 The Leader in Marvel Comics. 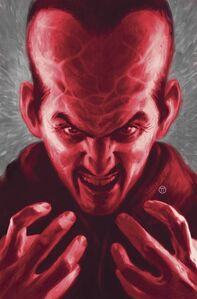 Dr. Sterns as the Red Leader. 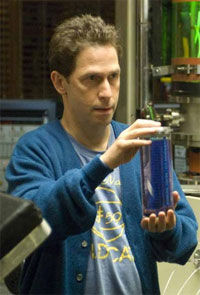 Tim Blake Nelson as Samuel Sterns in The Incredible Hulk. 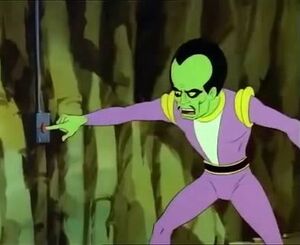 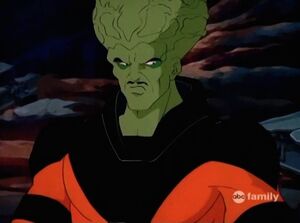 The Leader in The Incredible Hulk animated series. 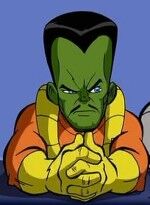 The Leader in The Super Hero Squad. 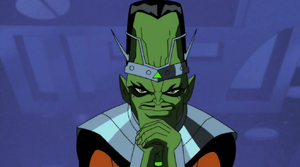 The Leader in The Avengers: Earth's Mightiest Heroes. 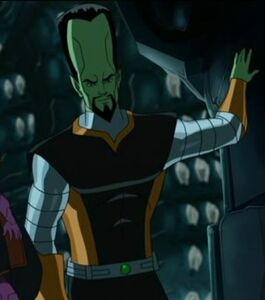 The Leader in Ultimate Spider-Man. 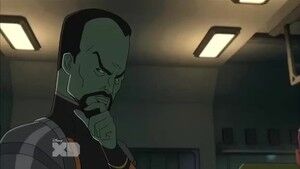 The Leader in The Avengers: Ultron Revolution. 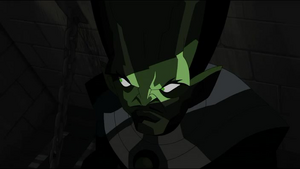 The Leader sits in his cell in the Cube. 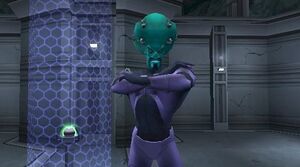 The Leader in the Hulk videogame. 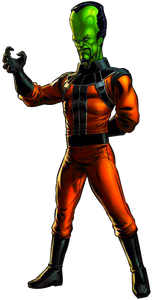 The Leader in Marvel: Avengers Alliance.
Add a photo to this gallery

Retrieved from "https://villains.fandom.com/wiki/The_Leader_(Marvel)?oldid=4296103"
Community content is available under CC-BY-SA unless otherwise noted.