Founder and leader of the Movementarians

Brainwashing control of all members

Forcing people to harvest for beans

Brainwashing and dominating the will of people.

Deceive the people of Springfield in order to take their money for himself (failed).

The Leader is the main antagonist in the Simpsons episode "The Joy of Sect". He is the founder of a cult sect named the Movementarians.

He was voiced by Hank Azaria.

The Leader is the founder of a cult posing as a new religion, the "Movementarians". He aspires to brainwash and dominate the will of the people of Springfield and take their money. Homer is invited to come to an introductory session. Everyone except Homer is brainwashed by their video (which states that all Movementarians will be taken by a spaceship to a new planet). After the cult's other methods fail on Homer, they finally win him over by singing the theme to Batman, replacing the word Batman with the word Leader in the song. The Leader lived in the "Forbidden Barn", and would sometimes observe the workers while driving around in a black limo, and would wave his visible white-gloved hand to the people.

Homer and his family are then taken to the Movementarian compound, where they are forced to harvest for beans on behalf of the Leader. Though Bart, Lisa, and Maggie end up being brainwashed to serve the Leader, Marge resists the brainwash and escapes from the compound. She enlists Rev. Lovejoy, Ned Flanders, and Groundskeeper Willie to rescue her family and deprogram them by impersonating as the Leader. When several of the Leader's enforcers caught wind of this, they send in their lawyers. Though Marge was able to deprogram her children by offering them 'hover-bikes', Homer was about to receive a mug of beer until the lawyers arrive and take him back to the compound, much to Marge's anger.

However, having got one drop of beer from the mug, Homer declares that he's no longer brainwashed and attempts to expose the Leader as a fraud by proving that there is no spaceship inside the Forbidden Barn. Needless to say, when Homer opens the barn, a real spaceship hovers and flies away with the Leader inside, declaring mankind to be unfit for salvation because of Homer's lack of faith. However, the spaceship falls apart, revealing to be nothing but a hovercraft with bags of money piloted by the Leader himself. This proves to everyone that Homer was right, and as the Leader loses control, he crashes into Cletus' farm. Cletus then relieves the Leader of the money at gunpoint. It is unknown what happened to the Leader afterwards, but it is presumed that the Leader is sent to prison for his crimes and that the Movementarian cult has finally ended for good. 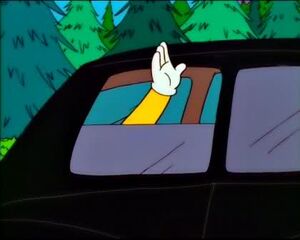 The Leader waving his hand at his followers from inside from his car. 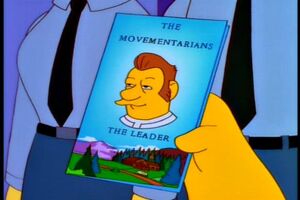 A Movementarian pamphlet with the picture of the Leader. 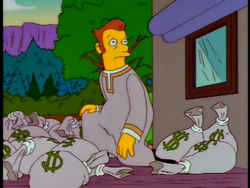 The Leader meeting his defeat.
Add a photo to this gallery

Retrieved from "https://villains.fandom.com/wiki/The_Leader_(The_Simpsons)?oldid=4106553"
Community content is available under CC-BY-SA unless otherwise noted.