Killing others for The Entity.

Sacrifice survivors to the Entity (currently).

The Legion are one of the playable killers in Dead by Daylight. They are a group of masked killers who rely on their speed, numbers and agility to overwhelm their prey.

Frank Morrison wears a gray hoodie under a black leather jacket, camouflage pants, a mask with a grinning smiley face drawn on and a couple of bloodstains, and bloodstained bandages wrapped around his hands, and gray shoes. Frank's weapon of choice is a hunting knife.

Julie Kostenko wears a similar outfit to Frank with a gray hoodie under a black leather jacket, but she wears tan pants and bloodsoaked bandages around her hands and gray shoes, and her mask, although similar in appearance to Frank's, has bloody finger markings on it. Like Frank Julie's weapon of choice is a survival knife.

Susie wears usually a teal hoodie with a red plaid skirt with black leggings, green sneakers, a black choker with a silver buckle, and a mask that appears to have stitching on it with her pink hair poking out from under the mask. Susie's weapon of choice is a ruler sharpened into a stake with duct tape wrapped around it.

Joey wears a black and white hoodie with what appears to be a black sling bag with pins around on his back with the strap around his right shoulder, bloodsoaked black gloves with whiteish strays, gray pants, black and light brown shoes and a bloodstained black and white Paisley balaclava-like skull mask with black facepaint around his eyes. Joey's weapon of choice is a karambit with a custom, more comfortable grip.

19-year-old Frank Morrison was a troubled foster kid who had done a number of things such as getting kicked off his school's basketball team for assaulting a referee by pushing him into the stands this incident also caused him to stop attending school, getting into fights, throwing tantrums, and lashed out as he bounced from foster home to foster home, despite all this Frank was described as being a man who could light up a room despite his bleak past. Frank was picked up by his next foster father Clive Andrews as they spent 7 hours on the road and would be the longest time they would spend together as Clive was an alcoholic who traded the checks he got from family services for drinks.

At first, Frank tried to get into another foster home, but changed his mind when he met Julie who wanted a better life and Frank as an outsider was her ticket. Frank attended all of Julie's parties where since everyone was younger than Frank, they were easily impressed by him, which he liked.

At some point, Julie introduced Frank to her best friend: the shy Susie, and later the three met the impulsive Joey who liked to showoff. The four would hang out at the old abandoned lodge on Mount Ormond and their time together was the perfect break from their boring town, Frank saw this as an opportunity to shape it into something powerful, lining up nights of debauchery and rampage, it got to the point where Julie, Susie, and Joey would do anything Frank said, testing their limits with bullying, vandalism, and theft which were essentially their weekend plans. However, one evening would change their lives forever when Frank dared Joey to vandalize the store that had recently fired him.

The four sneaked in easily as they thought the store was empty after closing hours, however, a cleaner who was working late had heard them enter and grabbed Julie when she walked near him, hearing her stifled crying awakened a dark impulse in Frank, and without hesitation, he rushed to her aid stabbing his knife into the cleaner's back, as the others stared at Frank in shock he ordered them to finish the job, with Joey reluctantly stabbing the man in the ribs, Julie stabbing him in the chest, before handing the knife to Susie who, with Frank's guidance, stabbed the man in the throat, killing him.

Acting fast, they mopped up the blood and shoved the body in the trunk of Joey's car and drove it up Mount Ormond where they buried the body. During this, Frank thought he saw something in the woods and ran off to see what it was with the rest of the group following behind him as they disappeared into an ominous mist.

The four were reported missing as their parents had thought they had just run away with Frank and each family came up with a different theory until a body was found inside Mount Ormond's lodge.

Ever since then, the group worked for The Entity, killing Survivors. 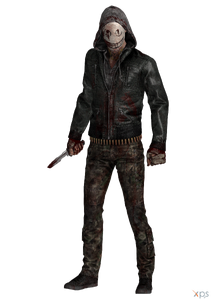 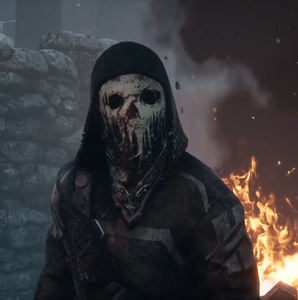 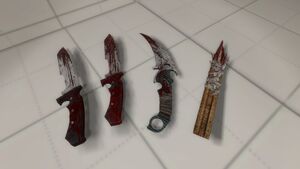 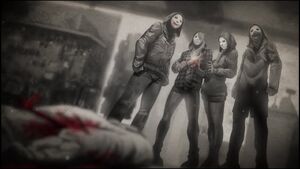 The Legion after killing the janitor. 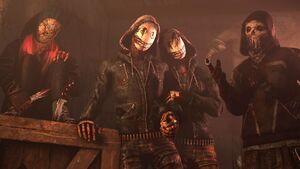 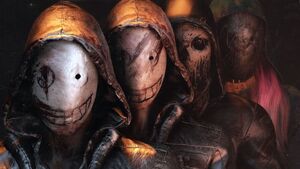 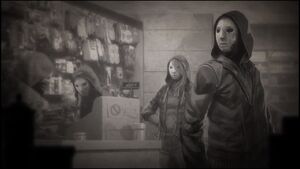 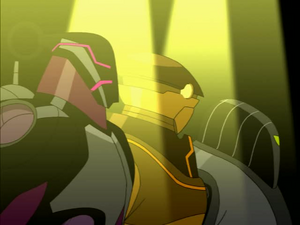 Retrieved from "https://villains.fandom.com/wiki/The_Legion?oldid=4354671"
Community content is available under CC-BY-SA unless otherwise noted.