Little Girl (by the Pegasus)

To trap beasts of mythology and force them to submit to a new title of her choosing. (successful)

The Little Girl is a one-shot villainess from a Robot Chicken skit. She is a seemingly innocent young girl who kidnaps various mythological animals and forces them to live by a self-made title. Her only appearance is in the season two episode "Adoption's an Option".

The girl appears to be about 7-10 years of age. She has Caucasian skin, ginger hair, and blue eyes. In the skit, she wore a white and pink dress with black shoes.

The Little Girl has an ironic personality to that of what the audience is used to. Instead of being the hero that saves the magical beast and later goes on adventures with them, she is the sadistic antagonist that wants to enslave them for her own selfish desires. She has no interest in magical qualities, but does seem to have a preference for abnormal coloring as she painted the creatures unnatural and bright colors.

The girl is cruel yet strategic when going about trapping her victims. She sets traps not lethal enough for them to fall victim to, but rather just to trap them. She then removes the qualities that might allow them to escape her. Finally, she uses painful methods of getting the creatures to do what she says. On top of this, she also exhibits qualities typical for that of a girl her age, such as the nicknames she made up, the colors she chose, her matter of speech, and her overall demeanor.

Her skit opens with her hopping through the forest until she happens upon a pegasus, who is stuck in a bear trap. He asks for help and she tells him that she'll be right back. When she returns she wields a pair of clippers. The pegasus assumes that she will try and use these to free them, but as he begins to correct her she snips off his wings. As he begins to cry out in pain she puts a bucket around his mouth and tells him that it's a "magic healing oats". He notices it smells funny and then passes out. As he is passed out, she paints him pink.

He later is awoken inside of a barn with the girl hugging him at his side, now referring to him as "Sunny Muffins". He tells her that it's not his name, and she pulls out a whip. She whips him repeatedly, the pegasus at first refusing to submit to her title until he couldn't take it anymore and caved. When he did, the girl left the barn in excitement. The pegasus turned to his left to find a Griffin painted blue, whom was also apparently forced into submission by the girl. 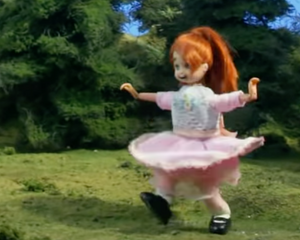 Skipping through the forest. 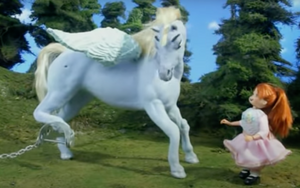 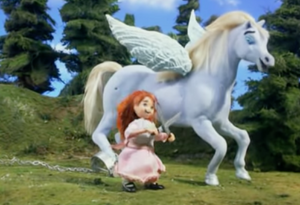 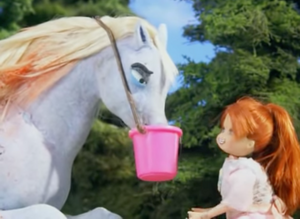 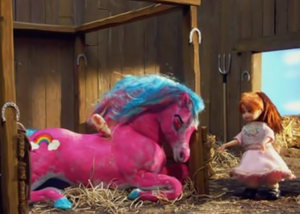 The pegasus now in her stable. 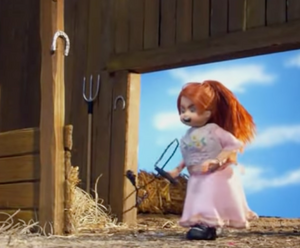