Trying to get rid of Pink Panther.

Prove he is better than Pink Panther (ongoing; repeatedly failed).

Wrathful Archenemy
The Little Man, also known as Big Nose, is the main antagonist of the Pink Panther franchise created by David DePatie and Friz Freleng. He is a regular character who is Pink Panther's archenemy.

He seldom speaks and has a distinctive big nose, and he is usually white in color but sometimes given a Caucasian shading. In some cases, he seems to be wearing nothing, but in other cases, he wears a costume (or at least a hat) fitting to his role in the cartoon.

As soon as he finally discovers the Pink Panther, he grabs a shotgun and shoots at the Pink Panther in a rage and gets tricked into shooting the house pink (which that the panther had poured pink paint into his shotgun) then he buries the panther's pink paint cans in the soil outside the house, where they "sprout" and grow pink grass and trees, and the panther moves in. But just before he moves in, he paints the white man completely pink. The painter gets upset and bangs his head against the mailbox outside. The Pink Panther then walks into the house as the sun (also turned pink) sets and the cartoon fades out.

The Little Man appears in various roles throughout the entire original series. Several cartoons depict him with a white dog as his pet.

He also appears in the 1993 TV series where he is voiced by Wallace Shawn and is shown to talk like the Pink Panther in the show and is one of the main characters and antagonists of the Pink Panther. However in some cartoons, he's depicted as an ally to the panther on some occasions.

The Little Man also appears in the Cartoon Network show Pink Panther and Pals where he is voiced by Alex Nussbaum and is a main character and main antagonist in the Pink Panther segments (here renamed as Big Nose). He always has a plan to get rid of the teenaged Panther in an antagonistic manner, but the Panther consistently foils his plans. Sometimes, his dog tries to get rid of the Pink Panther, only to side with the feline later on in the short. 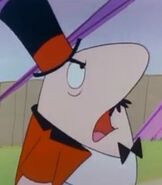 The Little Man (referred to as Big Nose) in Cartoon Network series Pink Panther and Pals.

Big Nose and his dog.

Big Nose disguised as a woman.