Villains Wiki
Register
Don't have an account?
Sign In
Advertisement
in: Mastermind, Doctors and Scientists, Archenemy,
and 36 more

Taking in interest in carpentry.

Having fun-filled nights out.

The Lobe is the archenemy of crazed-up superhero Freakazoid and the main antagonist of the Freakazoid! cartoon series. In the Teen Titans Go! episode "Huggbees", he serves as a guest-star and one of the two main antagonists.

He was voiced by David Warner.

Hardly anything is known about the Lobe, except that he is an evil genius and proud of it, has a huge ego and despises Freakazoid for his stupidity. He is easily recognized by his short stature and huge brainy head. He has attempted to destroy Freakazoid many times. Like many villains, he also has two large bodyguards who assist him in some of his evil plans; such as kidnapping famed carpenter Norm Abram to force him to build an enormous wood-made weapon for him. At first, the Lobe planned to build it himself, but his inability with tools made him so angered that he ended up temporarily in an asylum. At the end, Freakazoid and Norm Abram join forces to defeat the Lobe. This episode and series finale of the show, also shows that the Lobe has a friendly relationship with all the other villains of the show, as he cheerfully invited them all to a big party once he believes Freakazoid is about to be destroyed.

Despite often bragging about his huge intellect, the Lobe has sometimes shown what appears to be a lack of self-confidence; this is especially evident in the episode "The Cloud" in which Freakazoid manages to defeat him just by pointing out how stupid his plan is, causing the Lobe to go away depressed and apologizing. After he's gone, Freakazoid admits to the audience that the plan was brilliant. Like all Freakazoid characters, the Lobe breaks the fourth wall quite frequently. In "The Island of Dr. Mystico" he expresses a strong desire to become the main character of the show, but wonders if he would be able to withstand the pressure. 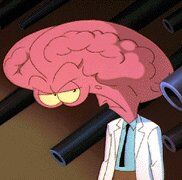 The Lobe
Community content is available under CC-BY-SA unless otherwise noted.
Advertisement