Phillipe Loren (As leader of the Syndicate)

The Luchadores are an antagonistic gang in Saints Row: The Third.

The Luchadores are a group of masked wrestlers led by Killbane. They deal mainly in selling steroids and gambling, and their gang color is green. Like the Morningstar and the Deckers, they are part of The Syndicate. Unlike the other two gangs, the Luchadores seem to lack a standing headquarters. Instead operating the majority of their operations from the 3 Count Casino in Port Pryor. They also appear to have a skyscraper Downtown on the eastern side of Loren Square.

The first encounter between the Luchadores and 3rd Street Saints is during the grand opening of a suspension bridge in Stilwater. Here they not only make quick work of the Saints, but also themselves, firing rockets from the rooftops of nearby buildings and leaving the bridge in pieces. The Luchadores are the only non-female gang in the Syndicate, and seem to be a bit tougher than the others, hit point wise. 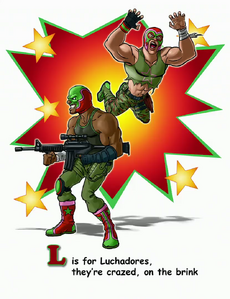 This article contains content derived from the "Luchadores" article on the Saints Row Wiki, licensed under CC-BY-SA.