The Lumberjack is a one-time villain from the Cartoon Network original series Teen Titans Go!, only appearing in the episode "The Bergerac", as part of the Superhero Summer Camp miniseries. He is a lumberjack who is always trying to steal Robin's girlfriends.

Robin retold the other Teen Titans the story of his first love, which happened at a summer camp once. Robin's girlfriend was a tree that he used to make out with. One fateful day, The Lumberjack came by and chopped down the tree that Robin was in love with and took her away, stealing his girlfriend. Robin cried and mourned as The Lumberjack took off with his girlfriend and he still remembers it to this very day. 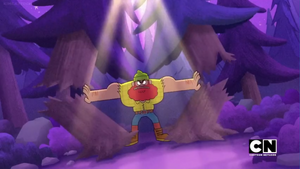