Avenge her cubs by killing Kiche and White Fang (failed).

Vengeful Predator
The Lynx is a major antagonist in Jack London's White Fang, and the 1982 anime film Shiroi Kiba Monogatari. She is a ferocious and vengeful feline who was responsible for killing One-Eye and attacks Kiche and White Fang in their cave.

Encounter with a Porcupine

When One-Eye goes hunting, he discovers some tracks and finds the lynx confronting a porcupine. An hour passes and nothing happens until the porcupine unrolls itself, giving the lynx the opportunity to attack, but it strikes her face with its tail, causing her to sneeze as she tries to brush the quills off. The lynx flees and One-Eye carries the dying porcupine with him.

When a famine occurs, One-Eye and Kiche leave their offspring in search of food, but only one cub survives (who would later be named White Fang). One-Eye robs snare traps made by Indians, but they move away. As One-Eye continues his search, he crosses the lynx's territory. The lynx attacks him and One-Eye attempts to fight back, but the lynx kills him. Kiche later finds his corpse and decides not to enter her lair as she senses the presence of the lynx and her kittens.

While the grey cub begins to learn the outside world, Kiche beings home a lynx kitten for him, while the rest of the litter was slaughtered by Kiche. The lynx finds her kittens dead and heads out to avenge them. She arrives at the wolf's lair and lets out a loud shriek of rage. The lynx crawls inside and Kiche pins her down. The lynx viciously claws at her and the gray pup intervenes. The pup bites into the lynx's hind paw, but she tears his shoulder and hurtles him aside. The pup gets back up and once again sinks his teeth into her leg. They manage to kill the lynx, but Kiche is severely wounded and they eat her corpse as they heal. 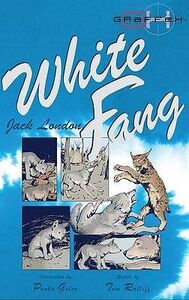 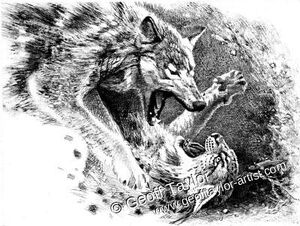 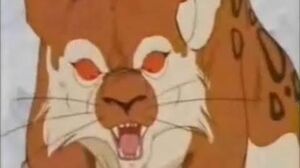 Villain Defeats The Lynx (Shiroi Kiba Monogatari)
The scene that lead to the Lynx killing One-Eye.