The Machine is the main antagonist of Amnesia: A Machine for Pigs. A massive factory-like complex built underground in London, it was created by Oswald Mandus in 1899 with the intent of harvesting humans (as well as turning them into manpigs for manual labor) all over the world for mass murder on an industrial scale in order to prevent the horrors of the 20th century.

It was voiced by Mark Roper.

The Machine was originally a non sentient factory designed to butcher pigs and created by Oswald Mandus, the owner of a meat factory as in hopes to keep his business going. Unfortunately, Mandus is going bankrupt due to investing so much on machinery and thus facing financial ruin and fearing that the bailiffs will come to repossess his home.

Mandus becomes desperate to find a way to get a large sum of money to avoid bankruptcy. He starts looking through his great uncle's paperwork and learn the revelations of the Vitae from Brennenburg and the Orbs. Not understanding the origin and function of these things, Mandus sees this as the opportunity to speed up his construction of the machine without investing.

Driven mad by revelations found in an ancient Mexican temple by use of the so-called "Orb" and bent on stopping this ghastly future, Mandus set about constructing the machine as a form of god in the hopes of saving mankind from future suffering via industrial, mechanized, mass human sacrifice. Using the hearts of his sons as an integral part of the machine, he starts working on constructing the machine. At some point Oswald's soul ruptures and integrates itself with the machine as The Engineer, giving it sentience.

During the machine's construction, Oswald then transferred his own blood into the machine to bring about its sentience, unwittingly implanting the broken half of his soul into the mechanical leviathan as well. Free of his dark alter-ego's malevolence and influence, Mandus crumbled, confessing to his dead wife he had become a monster beyond redemption, mourning her and his children.

He locked himself down in his bedroom as fever overtook him, erecting a steel cage around his bed, and bolted most of the doors shut within his mansion, in a desperate effort to ensure no one would find or reactivate the engines.

Amnesia: A Machine for Pigs

After a nightmare, Mandus, suffering from amnesia awakes from his bed and try to find his children. The Engineer calls him through the telephone, aware of Mandus' amnesia, he takes advantage of it to eventually trick Mandus to reactivate the machine that he had sabotaged to "save" his children. After Mandus finally reaches the Reactor and reactivates the machine, it reveals its true intentions to Mandus that it wants to destroy humanity and prevent future wars. The Machine releases and commands the manpigs to exterminate the people of London.

Mandus realizes that he has been tricked and what he has done for the fate of humanity, he swore to stop the machine once and for all. As he progresses through the underground, Mandus demands to know why it killed his children. The Machine is puzzled for a while and gave Mandus a clue that it was him who killed his own children. Though Mandus still couldn't understand what it really means. After going through many dangerous areas, he finally reaches near the core. The Machine starts to beg Mandus to not destroy it and reveals to him that it didn't kill his children but he did to sacrifice them to not go through future wars. Mandus, wanting to redeem himself for killing his children, walks up to the core of the machine and sacrifices himself by ripping his heart out alive. As the world silently enters the new century, both Mandus and The Machine die together. 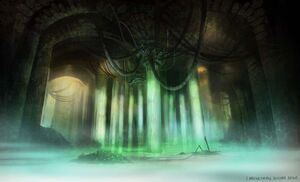 Early design
Add a photo to this gallery

Retrieved from "https://villains.fandom.com/wiki/The_Machine_(Amnesia:_A_Machine_for_Pigs)?oldid=3780585"
Community content is available under CC-BY-SA unless otherwise noted.