Enforce the "survival of the fittest" upon all.

The Madri, also known as Madri Priests, is a massive religious sect of mutants that is one of the 2 fanatical cults alongside the Clan Akkaba that faithfully serve Apocalypse and they are enemies of the X-Men.

When Legion, the mentally unbalanced mutant son of Professor Charles Xavier and Gabrielle Haller, traveled back in time in an attempt to kill Magneto, he accidentally killed Xavier instead, thus creating a splinter universe known as the Age of Apocalypse. In that reality, mutants became the dominant species on Earth and Apocalypse himself rose to power and enslaved humanity.

The Madri were loyal followers of Apocalypse and their numbers, for the most part, were the product of the mutant duplication powers of Jamie Madrox (Multiple Man). Each duplicate was conditioned to be fiercely loyal to the cause of Apocalypse, and founded a religion around him.

The majority of their numbers were located at a church in Quebec, Canada, however, members of the Madri were stationed all over Apocalypse's America. Their numbers second only to the Infinites, the Madri were not completely comprised of Madrox duplicates, as Rictor, who was a civilian member of Jamie Madrox's team of superhero detectives known as X-Factor Investigations, considered himself a member of the Madri under the name "Mudir Rictor". The Brotherhood of Chaos were presumably considered members of the Madri as they wore similar black cloaks. The Horseman of Apocalypse known as Abyss appeared to have some form of command over the Madri.

Madri had at least 3 different sets of attire: their trademark black robes when in their place of worship, combat armor for battling enemies of Apocalypse, and a crimson robed outfit with optional hooded visor and battle staff for security functions. The warrior class (which includes Rictor) were marked with a green tattoo around the eye area.

One of the Madri was curious enough to look through Apocalypse's database, which cataloged those he deemed fit to survive in his rule ("The Chosen") and those who were not ("The Forgotten"). This member of the Madri was set at ease upon reading that the Madri were considered the chosen. However, Apocalypse caught the lone Madri reading his secret files and change his decision, slaying the errant worshiper on the spot.

A contingent of warrior Madri attempted to capture Gambit and his X-Ternals, although they constantly failed to capture the group of thieves. Their leader Rictor attempted to prevent them from stealing star chart information, but found himself teleported to the Shi'ar galaxy with them. Rictor teamed up with the Imperial Guard to capture the X-Ternals and prevent them from stealing a shard of the M'Kraan Crystal. He failed and returned to Earth. On Earth, he almost botched double agent Guido Carosella's attempt to capture the crystal and kidnap Magneto's son Charles. When reporting back to Apocalypse, Rictor was executed for almost ruining Apocalypse's schemes.

When Forge's Outcasts were manipulated by Essex to investigate one of Apocalypse's factories, the idealistic Nate Grey was horrified to find that it was where human corpses were processed into raw material. In destroying the factories' operations, Nate clashed with a number of Madri security forces, killing some and wiping out the minds of others. One surviving Madri reported the existence of Nate to Apocalypse.

A group of Madri Priests loyal to Abyss accompanied the Horseman along with the Brotherhood of Chaos to attempt to prevent or compromise a Sentinel evacuation of surviving humans still in North America, a mission that the X-Men were assisting. When Abyss attempted to lure the X-Men to his craft, he killed some of his Madri Cardinals and strung them up at the ships opening hatch as a show of power.

Later, when Apocalypse defeated Magneto and Bishop in battle, he had Bishop shipped to the Madri's church in Quebec to have his mind probed by the Shadow King. After the Shadow King's mental probe, the Madri tortured Bishop, cutting him and drinking his blood. When the X-Men came to save Bishop, they found themselves overrun by an army of Madri. Quicksilver came across the original Jamie Madrox who begged Quicksilver to kill him to end the threat of the Madri. When Quicksilver refused to kill Madrox, Madrox killed himself, causing all the Madri members that were an extension of himself to fall down dead, ending their threat forever.

The Madri under their notable name "Madri Priests" appeared as enemies in X-Men Legends II: Rise of Apocalypse. According to Emma Frost however, Apocalypse built his influential cult of devoted followers thousands of years in Egypt during his time. They seek to bring about the Age of Apocalypse as they lived by their code which is also their ageless master's dangerous philosophy, "the survival of the fittest".

The Temple of the Madri

The Church of the Madri 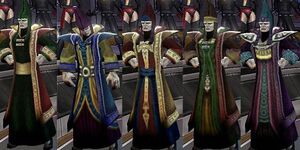 High-level Madri Priests in X-Men II: Rise of Apocalypse.
Add a photo to this gallery
Retrieved from "https://villains.fandom.com/wiki/The_Madri?oldid=3781288"
Community content is available under CC-BY-SA unless otherwise noted.