The Man (Carnival of Souls)

The Man is a creepy, ghoulish character who is the main antagonist of the 1962 independent horror film Carnival of Souls.

He was portrayed by the late Herk Harvey who also directed the 1962 movie.

Welcome to the Carnival of Souls

Mary Henry is riding in a car with two other young women when some men challenge them to a drag race. As they speed across a bridge, the women's car plunges over the side into the river. The police spend three hours dragging the murky, fast-running water without success. Then Mary miraculously surfaces. She cannot remember how she survived.

Mary then drives to Utah, where she has been hired as a church organist. Odd things happen along the way. At one point, she can get nothing on her car radio but strange organ music. (This recurring music was played not on a church organ but a theater organ, which is capable of producing many unique sounds.) She passes a large, abandoned pavilion (in reality, Salt Lake City’s Saltair amusement park) sitting all by itself on the shores of the Great Salt Lake. It seems to beckon to her in the twilight. Shortly thereafter, while speeding along a deserted stretch of road, a ghoulish, pasty-faced figure replaces her reflection in the passenger window and stares at her. When The Man suddenly appears in front of her, she swerves off the road. She manages to get back on the road. At a gas station, the attendant tells her the pavilion was first a bathhouse, then a dance hall, and finally a carnival before shutting down.

In town, Mary rents a room from Mrs. Thomas; John Linden, the only other lodger, wants to become better acquainted with the blonde newcomer, but she is not interested. That night, she becomes upset when she sees The Man downstairs in the large house and retreats to her room. Mrs. Thomas, who kindly brings her some food, says she did not pass anyone.

Soon, Mary begins experiencing terrifying interludes when she becomes invisible and inaudible to the rest of the world, as if she simply is not there. When The Man appears briefly in front of her in a park, she flees, right into the arms of Dr. Samuels. Samuels, though he acknowledges he is not a psychiatrist, tries to help her.

Her new employer, the minister, is a bit put off when she declines his suggestion of a reception to meet the congregation. When she practices for the first time, she finds herself shifting from a hymn to eerie music. In a trance, she sees The Man and others of his ilk dancing. The minister, hearing the strange music, denounces it as "profane" and insists upon her resignation.

Terrified of being alone, Mary agrees to go out on a date with Linden. When they return home, he talks his way into her room, but when she sees The Man in the mirror, she becomes upset and tries to tell him what has been happening to her. He leaves, believing she is losing her mind.

After talking with Samuels again, Mary believes she has to go to the pavilion. There, however, she finds no answers.

Other ghouls join The Man. Mary tries frantically to escape, at one point boarding a bus to leave town, only to find that all the passengers are ghouls. Then she wakes up, showing that she dreamed this sequence at least. In the end, she is drawn back to the pavilion, where she finds her tormenters dancing. A pale version of herself is paired with The Man. When she runs away, they chase her out onto the beach. She collapses, and they close in.

The minister, the doctor, and the police investigate afterward, but are baffled. Her bare footprints in the sand (the only ones) end abruptly, but there is no trace of her.

In the final scene, the car is finally located and pulled from the river. Mary's body is in the front seat.

Being a ghost, the man cannot die because he is already dead but he does posess a numerous amount of powers including changing his victims' reflection in the mirror so their reflection is the man's image. He can also stay underwater for long periods of time and whilst appear as a hallucination to Mary Henry he appears invisible to the living and is also very persuasive and has lots of allies (The Carnival of Souls) to bring the dead souls where they belong. Despite being a ghost, he is good at ballroom dancing. He is usually found in abandoned amusement parks, murky lakes or highways floating beside automobiles.

The Man has a funeral-like appearence with him always wearing a black suit. His skin is white as chalk and his eyes sit deep within black pools of racoon like mascara. 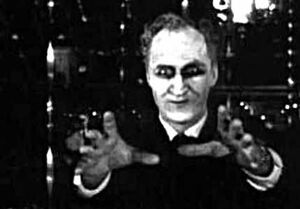 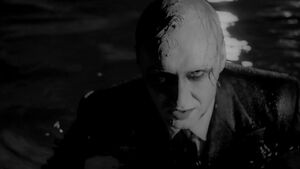